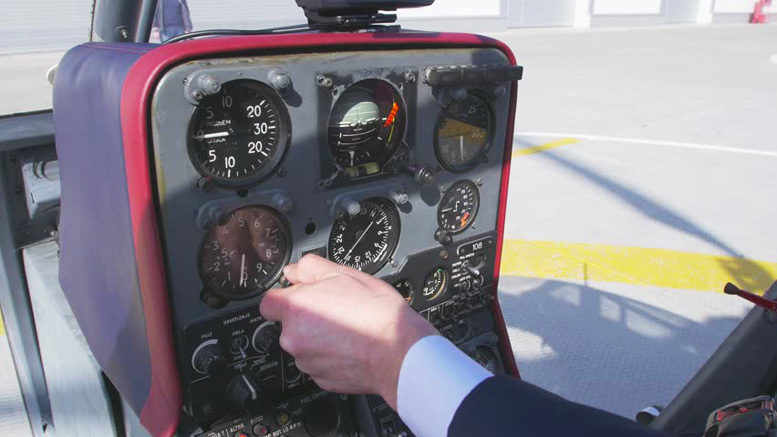 EDITOR: How far have we come since 1992? Below was the situation then – in some respects, not much has changed besides coverage, though in other respects – there have been huge advancements in the electronics industry make them smaller, lighter, smarter and on top of that all, more accurate.

Whether you fly big corporate jets or single-engine short-hoppers, keeping your avionics in top shape is vital to safe flight.

There’s no question that the astonishing capability of today’s “smart” avionics can add greatly to the pleasure, reliability and safety of your flying.

This special section is a guide to the various types of modern avionics, along with suggestions for efficient and economical maintenance of your equipment, whether it’s old or new.

Loran has achieved tremendous popularity over the past decade. The Loran-C system, which now covers the entire continental United States and many other geographical areas worldwide, makes navigation almost automatic.

Simply enter your destination airport and the set instantly provides a bearing and distance. Once airborne, you will see your desired track, groundspeed and estimated time en route.

You will receive a warning message when you are approaching a TCA or other special-use airspace. In an emergency, press a button or two and get immediate guidance to the nearest airport.

Some sets are certifiable for IFR en route and terminal operations, and Loran non-precision approaches are on the way. Loran signals are subject to degradation from precipitation static.

To reduce the chance of signal loss, your aircraft should be checked by an avionics shop for airframe bonding and the installation of static dischargers should be considered.

The Global Positioning System is a navigation system whose signals are transmitted by satellites in orbit approximately 11,000 miles above the Earth.

GPS is a three-dimensional system, and very accurate position information can be derived in all three dimensions (i.e. latitude, longitude and altitude), depending on how many satellites are in view at one time.

GPS signals are line-of-sight, and at least three satellites must be within view of an aircraft’s antenna in order for the system to be utilized.

Coverage will be worldwide, 24 hours a day, when the full constellation of 21 satellites (plus three spares) is in orbit. It is estimated that GPS will be fully operational in mid-1993. At present, pilots can use the system most of the time.

An ever-increasing number of GPS receivers are coming onto the market. Some are stand-alone units, while others are part of multi-sensor systems that combine GPS and Loran signals for optimum position information.

A moving map system is, in effect, an electronic aviation chart with airports, navaids, IFR intersections and the outlines of special use airspace—all depicted on a screen in their constantly changing relationship to your plane.

You can choose from a number of ranges, somewhat like switching electronically from a WAC chart to a sectional to a TCA chart. A symbol on the screen represents your airplane. Airports and navaids appear on the display in their positions relative to the symbolic plane.

In other words, you don’t have to interpolate your position on a paper chart from information provided by your VOR or Loran set. The electronic chart shows you where you are all the time—even when you’re taxiing out to the active runway.

But how does the moving map system know where you ore? It gets your position information through an interface with a Loran or GPS receiver equipped with a data port.

Some moving map systems are mounted in the aircraft’s panel, while others have displays that can be placed elsewhere in the cockpit.

The VOR system that has been around for so many years still forms the basis for air traffic control procedures. Most IFR routings are along Victor airways that are defined by VOR stations, and therefore a VOR receiver is a necessity for IFR operations. 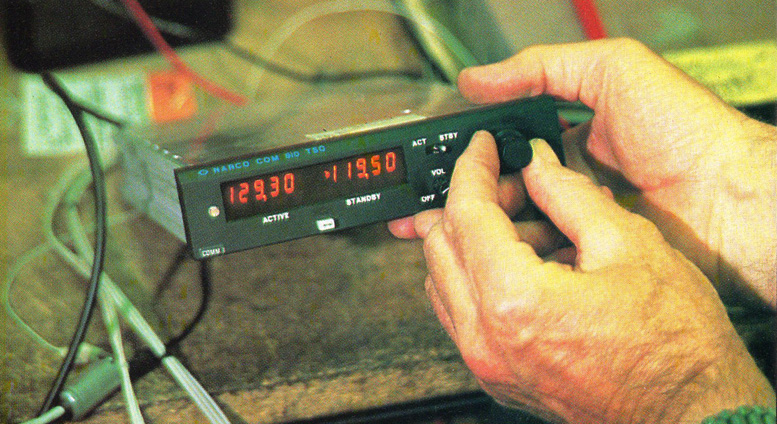 Today’s electronically tuned VHF comm transceivers are more capable and generally more trouble-free than the mechanically tuned systems of the past. The ability to store frequencies reduces pilot workload, particularly in busy controlled airspace. These sets are available in a variety of configurations to optimize panel space.

This type of equipment measures fuel flow, and thus can display current fuel burn (in gallons or pounds per hour) and can compute the amount of fuel remaining, based on pilot input of the initial fuel quantity.

When interfaced with a compatible Loran receiver, which is able to determine the aircraft’s groundspeed and distance to destination, the fuel computer can tell you whether or not you have a safe margin to complete your trip at the existing power setting and wind conditions.

There’s nothing like a line of thunderstorms to spoil your flying day—especially if you get too close. Airborne weather radar equipment has been greatly improved in recent years, with three- and four-color displays to help you determine rainfall intensity. Some of the models also have turbulence detection capability.

Another weather avoidance concept is the passive type of system that locates thunderstorm activity by detecting electrical discharges. Several manufacturers now offer their own methodology for accomplishing this. This equipment is suitable for single-engine planes as well as more complex business aircraft.

Speaking of spoiling your day, a midair collision would really do it, and even a near miss is likely to provoke unhappy thoughts. FAA-designated TCAS (traffic alert and collision avoidance system) equipment is not likely to find its way into the cockpits of general aviation aircraft; it’s sized and priced for airline and commercial use.

A collision avoidance system designed specifically for general aviation planes is now available, however, and a system suitable for upper-end corporate aircraft is also being produced.

People become pilots for many reasons, but its likely that most people who fly enjoy the “hands-on” activity of controlling the airplane. Why, then, buy an electro-mechanical device that does the flying for you.

There are a number of reasons. If you fly single-pilot IFR, you know how busy you can get, copying amended clearances, trying to keep track of your position while being vectored hither and yon, etc.

Even if you’re strictly a VFR pilot, coming into a TCA can give you an IFR-like workout, and being able to dial in headings and altitudes can help keep you ahead of the game. On a long trip, getting spelled at the wheel can help stave off fatigue.

And if the unexpected pops up, like weather or a malfunction, it’s extremely helpful to have the piloting taken care of while you assess your options. Types of equipment range from a simple single-axis autopilot to a sophisticated three-axis system.

An autopilot can get steering information from a directional gyro that has synchro output, or from a CDI or HSI that is driven by a VOR/LOC or Loran receiver.

Whether your avionics are new or old, there are some basic steps you should take to keep them performing reliably. The worst enemy of your avionics equipment is heat, and a cooling fan with proper ducting is highly recommended. Be sure the fan you select is designed for aircraft use, with a motor that will not create radio interference.

Keep your avionics as cool as possible to avoid unnecessary repairs.

Ram air cooling by means of outside air vents is cheaper but less satisfactory than a fan because this method can bring moisture from the outside into the radios.

On a hot day, temperatures can build up in the cockpit that far exceed the TSO specifications of the radios, so if you store your plane outside, invest in a cabin cover or a set of thermal screens. Also, keep the doors and windows open while you’re taxiing and turn on just one comm until heat has dissipated.

Another thought on keeping your avionics healthy is to run them all whenever you fly; its a fallacy to try to “save” your radios by keeping them off when they’re not in use. (An exception is a weather radar utilizing a magnetron.)

If your plane is not equipped with an avionics master switch, consider installing one to prevent accidentally having a radio on when you fire up the engine. This can cause problems because the starter motor is a big inductor, and when it’s turning it draws a lot of current over a short period of time, inducing a voltage spike. 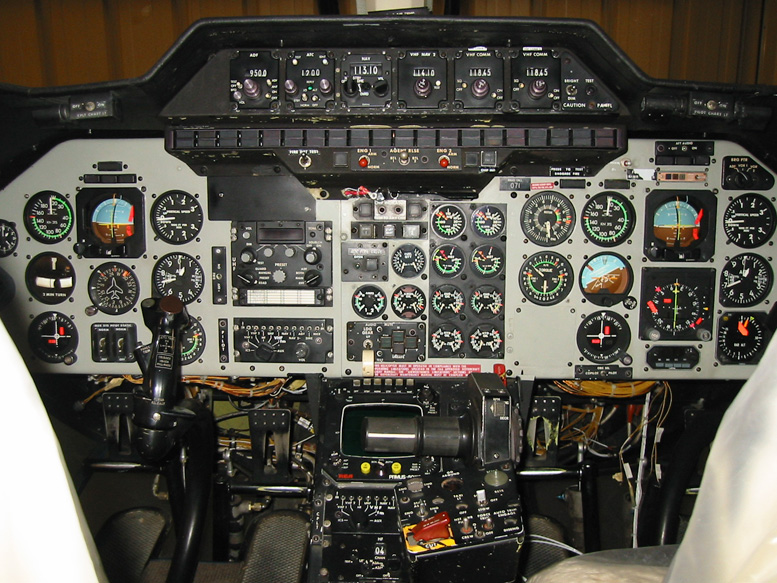 If one of your radios malfunctions, it will save you time and money if you can isolate the problem before bringing it to the avionics shop. The most exasperating failures are the ones that are intermittent; these problems seem to disappear as soon as the errant set is brought in for repair!

When you are faced with a problem that comes and goes, make a record of the conditions that exist during each failure: length of time of the failure, temperature, aircraft position and anything else that might be applicable.

When the failure occurs, turn off other avionics and see if that has any effect. If a comm set goes silent, open up the squelch circuit to determine whether you are getting any audio.

Most Loran receivers have a number of diagnostic, or status, displays. Its a good idea to make a note of such readings as SNRs (signal-to-noise ratios) when the set is operating properly.

Compare these to the readings that are displayed during a malfunction and provide the avionics technician with this information. You can probably get some other trouble-shooting tips from a good avionics shop, relative to the equipment in your panel. 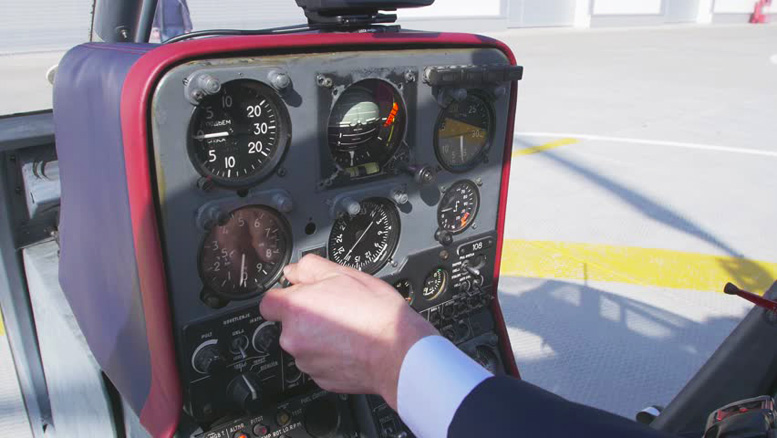 Be the first to comment on "The Electronic Umbrella – Aviation Electronics"