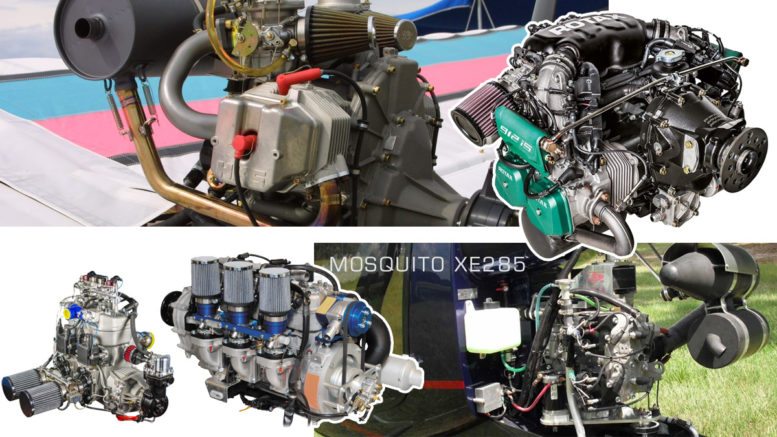 WHAT ARE THE DIFFERENCES BETWEEN THESE TWO COMMON ENGINE TYPES?

“Why do so many pilots badmouth two-stroke engines?” I have even seen bumper stickers bearing the message that “Friends don’t let friends fly two-strokes.”

Good question! Two-strokes have been the engine of choice in ultralights since day one, and for good reason. In general, two-stroke engines have a tremendous power to weight ratio. Part 103 states that ultralights can weigh no more than 254 pounds, so when it comes to these planes, keeping things light is of prime importance.

When you’re talking about true ultralights, there’s really little choice involved. Look at the alternatives, and certified engines aren’t even in the picture. Go ahead and try to find a 28-hp certified engine. Good luck. They don’t exist.

Even for very light aircraft, like bare bones two-seaters, low-horsepower-certified aircraft engines, like the Continental C-65, are just too heavy for the power they deliver. Small liquid-cooled automobile engines make sense, but for the most part only once you get up to higher horsepower ratings where you can afford to throw in the added weight of the radiator and its cooling system.

Very noisy, very inefficient, and very unreliable. Later, small two-strokes were specially modified for ultralight use. These units were equipped with reduction drives to allow the prop to more efficiently use the available engine power.

Early two-stroke engines had single spark plugs and magneto ignition systems. The spark plugs were prone to whiskering, a condition caused by a piece of carbon shorting the plug between the electrode and the base and causing the plug to fail. When all you have is one cylinder and one spark plug, losing one cylinder instantly turns your ultralight into a glider.

Early ultralighters who had seen the light had a saying: never fly over anything that you wouldn’t want to land on. The modern two-stroke aviation engine has come a long way from the chainsaw and go-cart engines of the early ultralight movement. Today’s two-stroke engines are more reliable and lived longer.

Many modern two-stroke engines have dual ignition, dual carbs, liquid cooling, which keep hot spots down to a minimum, and some, like the Rotax 582, have oil injection, which means that you no longer have to mix oil in with the gas every time you fill up, and that just the right amount of oil is automatically injected by the system.

Two-stroke engines are not without their faults. They burn a lot of gas, they tend to stop running completely before they’ve given the pilot any sign of mechanical problem, and they don’t go many hours between overhauls.

Another problem is that two-strokes require proper care. They are intolerant of faulty fuel mixtures and sloppy maintenance. They do have a higher vibration ratio than four strokes, so great care must be taken during the pre-flight each time you fly and all parts on the power train must be properly safetied and secured. 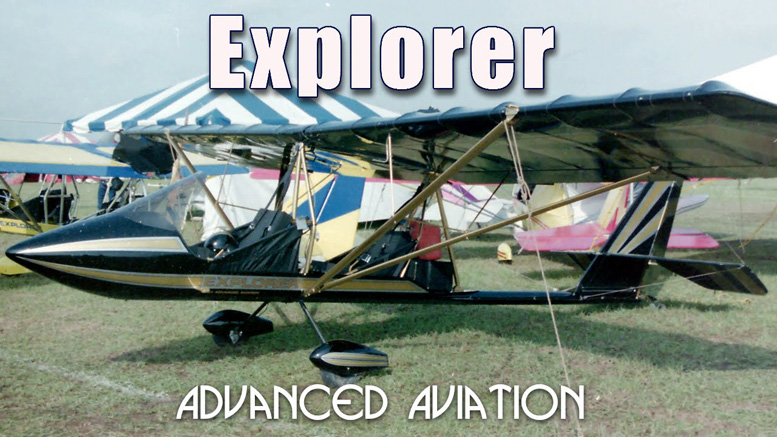 Two-stroke engines, like the Rotax on this Advanced Aviation Explorer, provide lots of power for not much weight and at a good price. The down side is high fuel consumption, noise, and vibration. Most of the time, you’ll have to mix your own gas and oil.

Moisture and inactivity are also the enemies of two-stroke engines. If left for long periods of time moisture will gather in the lower end of the engine and damage the bearings. This unseen damage is certainly going to surface at exactly the wrong time, usually on takeoff.

Still, properly maintained, a good two-stroke engine will give you good service. Most owners examine the top end of the engine at between 150 and 200 hours of engine life and do a complete overhaul at around 500 hours.

Economics is where the two-stroke engine really shines. Maintenance is greatly simplified because there aren’t that many parts to replace. Unlike a four-stroke engine there aren’t any valves, push-rods, cam shafts, cam fol­lowers, timing chains, timing belts or valve guides. Each cylinder only has a piston, piston rings, cylinder head, con­necting rod, and wrist pin.

The lower end of the engine has main bearings and connecting rod bearings which rotate on the crankshaft. Overhauls are easy and inexpensive because there aren’t that many parts to replace. Four-stroke engines seem to be coming on strong these days.

Kit builders like the reliability, the smooth operation, and the low fuel consumption of four-stroke engines. Several companies are not offering lightweight two-cylinder four-stroke engines that can be used for ultralight-type aircraft.

These engines are almost all based on the Volkswagen (or half Volkswagen) engine, which, not coincidentally, closely resembles certified-aircraft engines produced by Continental, Lycoming, and others. These engines are air-cooled, and generally use some kind of CDI ignition.

The problem with most of these engines seems to have been a lack of reliability’ and the failure to produce the kind of power they promised, especially given their heav­ier weights. Still, the lure of the four-stroke is strong, and we expect to see continued development of very light four-stroke aircraft engines.

Four-stroke engines seem to be more suitable for larger experimental aircraft. Rotax even went to four-stroke technology for its very popular Rotax 912 four-cylinder, 80-hp aircraft engine, of which a certified version now exists. With a TBO of 1200 hours, and even longer life expected, the air/liquid cooled 912 is about as reliable as any engine you’re going to find.

It’s also good on gas (matching the fuel consumption figures of two-stroke engines putting out half the power), low on vibration, and easy to start. It is expen­sive, though most Rotax 912 owners we’ve spoken with feel they’ve gotten their money’s worth and then some.

Other four-stroke certified alterna­tives have begun to appear to satisfy them. Several companies are putting out liquid-cooled Subaru conversions, which produce about 100 hp (older EA81 units) with a reduction unit installed.

The problem with some of these engines is that they’re getting so expen­sive you can buy a certified-aircraft engine for a similar investment. Engines built by Lycoming and Continental have lots of good things going for them, including reliability, redundant ignition systems, and smooth-power curves.

Moreover, every single part on these engines is documented by the FAA with serial numbers and a tracking history’. You won’t get such service from the makers of two-stroke engines. What does the future hold in store? It’s very possible that two-stroke power will prevail even in higher horsepower applications.

In a very few years Detroit will discover the advantages of fuel-injected, oil-injected, computer-con­trolled two-stroke engines and a whole new breed of super-powerful lightweight cars will soon follow. Of course, we’d be crazy if we didn’t try these things out in our airplanes. After all, why do you think they call them experimentals? 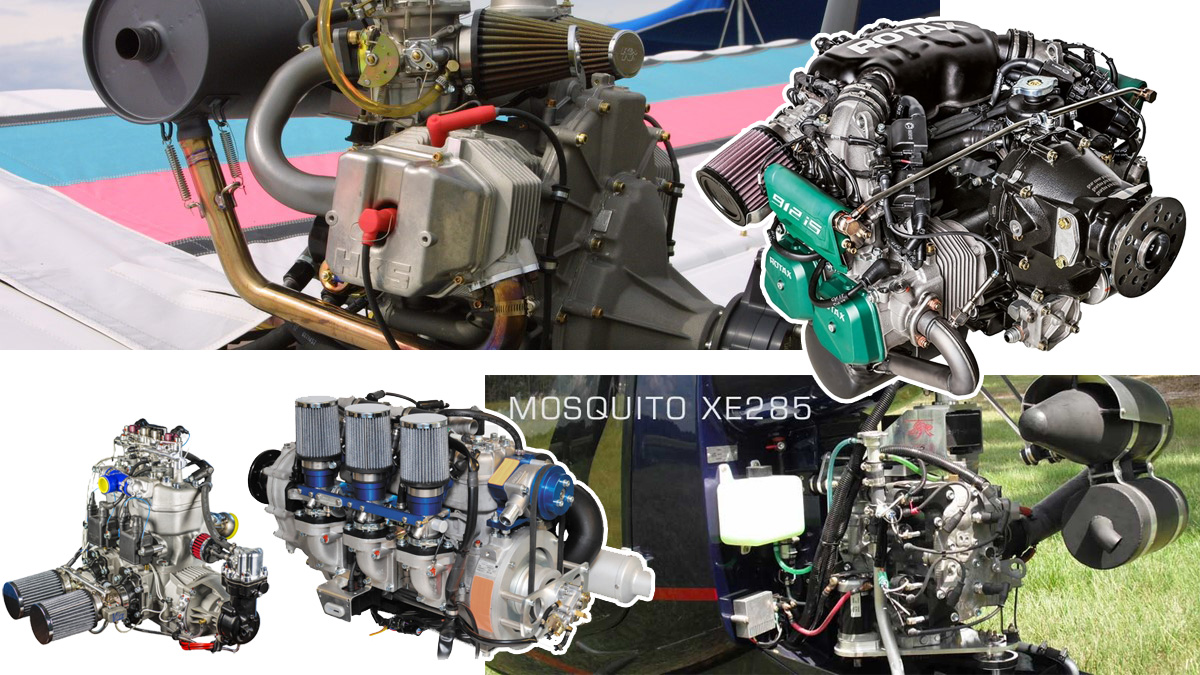