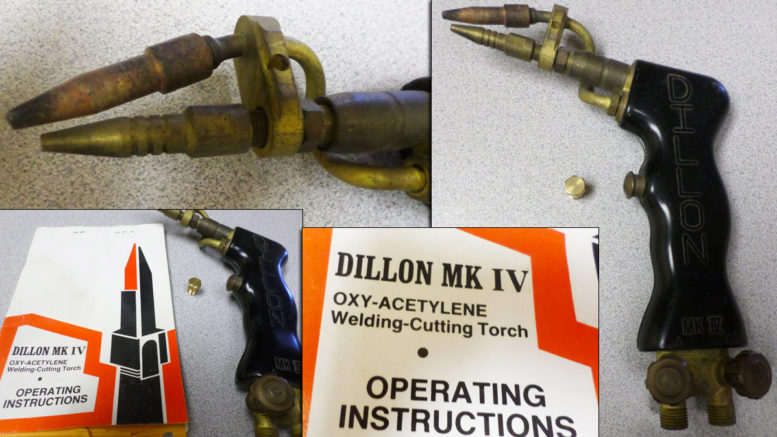 EDITOR’S NOTE: “As part of our welding series, we thought it appropriate to review this new torch from Dillon. It promises to be a real boon to homebuilders who must weld a variety of different materials and would like the convenience of being able to do it with only one welding outfit.”

The new Dillon torch, the latest evolution of the Dillon Series of oxygen and acetylene equipment, is the brainchild of Mr. N.T.E. Dillon of Adelaide, Australia. Introduced in 1981, after 11 years of intensive research and development, the torch has evolved into the MK IV.

Manufactured in the United States by Dillon Industries, the owner of 92 worldwide patents, the Dillon MK IV represents a revolutionary concept in gas welding and cutting. It is remarkably easy to use by simply following the directions provided in the instruction manual.

Its unique patented design allows the DilIon MK IV to operate on four pounds of pressure equally, on both the oxygen and the acetylene, the result of which produces a soft, low-velocity flame with a temperature of 6,860 degrees Fahrenheit at the tip of the cone. This low-velocity flame prevents the all-too-familiar problem of “blow-out” of the weld puddle.

The mixing chamber combines the gases in such a way as to produce a secondary flame which is virtually free of un-burned oxygen. This causes the weld puddle to be shielded from oxidation, and allows the welding process to take place with little or no flux needed.

The cross section of the secondary flame is considerably smaller and more elongated than a conventional torch with a similar cone setting. This means that less gas is required to support the flame, and that the heat is concentrated in the weld area, not dispersed into the surrounding metal. Distortion is now held to an absolute minimum.

Due to the uniqueness of the MK IV, only four tips are needed for all welding operations. Each tip has an infinite number of adjustments. These four tips equal some twenty-six tips required for conventional gas welding equipment.

The overall result is that the operator has far greater control over the welding process due to the smaller, more precise flame. In addition, the Dillon MK IV is much simpler to use, therefore training time is reduced.

Oxygen and acetylene consumption is dramatically reduced, up to eighty percent, because of the low pressure settings. Specialized filler rods and fluxes are seldom necessary due to the nature of the de-oxidizing flame.

The mechanical strength of the welds on aluminum and stainless steel have been independently tested, and were found to be equal to, or better than, welds produced by the M.I.G. and T.I.G. processes. In all, the Dillon MK IV is a versatile, portable, cost-effective tool for the professional and nonprofessional alike.

Features and benefits of the Dillon MK IV torch are many:

Only four tips are required for all cutting and welding functions, rather than as many as 26 needed by the standard torch. This not only saves money on inventory but, more importantly, it saves considerable time which would be needed to continually change them.

The new Dillon torch can easily weld aluminum. It can weld even dirty aluminum. This means that shops can weld aluminum with Dillon’s inexpensive torch rather than invest in a M.I.G. or T.I.G. for $1500 to $3000.

Also, since it can weld dirty aluminum, expensive man-hours of cleaning and preparation are saved. Because of the low operating pressure (four psi), the flame is highly concentrated, centering on the area of weld, thus reducing distortion of the surrounding metal.

In cutting, this concentrated,-narrow flame produces narrower cuts with reduced slag, minimizing post cleaning. Both stainless steel and cast iron can be welded easily, which is extremely difficult to do with a conventional torch. 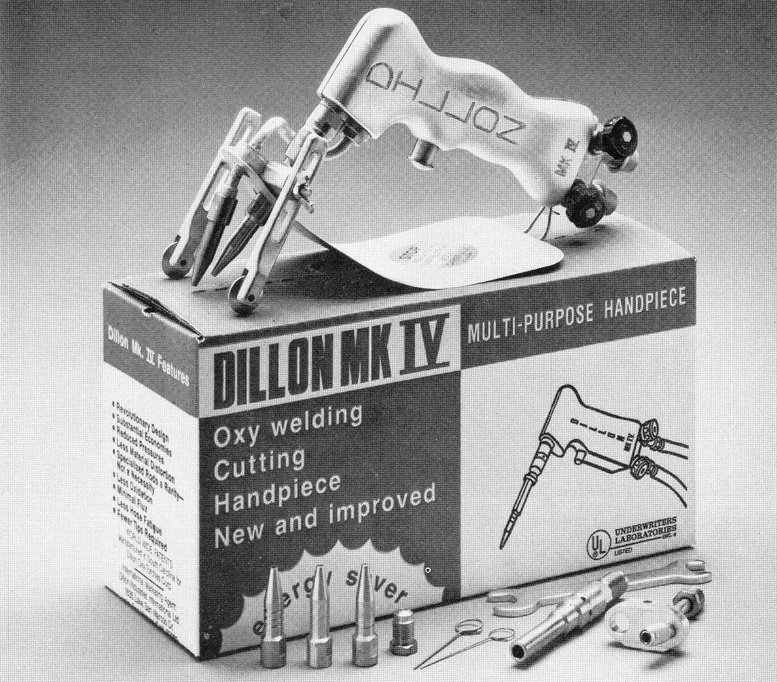 The new Dillon welding gun has a number of unique properties which allow it to weld a variety of metals, from aluminum to stainless steel.

Because of its unique patented design, the Dillon MK IV develops a flame of 6860 degrees F. This compares to approximately 5900 degrees F for the standard oxygen/acetylene torch. Since the oxygen molecule disassociates at 6859 degrees F, there is little or no oxidation of the metal.

Due to this, fluxes are rarely needed, and cleaner, stronger welds are possible.

The ability to weld dirty aluminum, and weld with a concentrated flame, makes it possible for the Dillon MK IV to weld even aluminum automobile radiators. At present, this is not possible with any other torch, oxy/acetylene or arc.

Cutting and brazing of automobile bodies, even when galvanized, are possible due to the precise flame of the MK IV. Because of its versatility, the Dillon torch fills an existing gap in the industry.

It is replacing existing gas welding torches in some of the major American corporations, and it is also being purchased by the small company who is reluctant to invest in an M.I.G. or a T.I.G. for the few times they may use it.

Based on current prices, after using two tanks of oxygen and two tanks of acetylene, the gas savings alone would pay for your Dillon MK IV.

Here’s a short explanation of the Dillon welding process:

When acetylene is burnt completely in air, the oxygen in the air combines with the acetylene to form two different chemical compounds, carbon dioxide and water vapor. This means that acetylene plus oxygen yields carbon dioxide plus water vapor plus heat. The basic chemistry of oxygen/acetylene burning as used in welding:

This formula is adhered to by the marine diver/welder, the method of operation being entirely different from surface welding in which our immediate interests lie. It is known and accepted that:

The error in this equation is that if 02 from atmosphere is induced, then a further additional element must be added to the equation, the addition being 4N2. Thus the equation should be:

Many books of reference tend to accept the 02 induction, but reject the 4N2 induction on the grounds that it plays only a minor part in the chemical reaction of the flame. However, it does have two major effects upon the flame when acetylene is burned in the air.

In the first instance, a considerable quantity of inert gas (nitrogen N2) must be heated by the flame, and this, of course, lowers the overall flame temperature, thereby allowing the oxygen and nitrogen content to combine, resulting in a nitrous oxide combination.

Secondly, the oxygen required for the acetylene is more widely distributed, the result being a bushy, less concentrated flame. The temperature rating in this situation will produce temperatures ranging from 5850 degrees F, to 6300 degrees F, with complete combustion.

The high oxygen and nitrous oxide content of the flame is now a big factor in the chemical reaction on the weld area, making the use of fluxes mandatory in an attempt to slow down this destructive process. 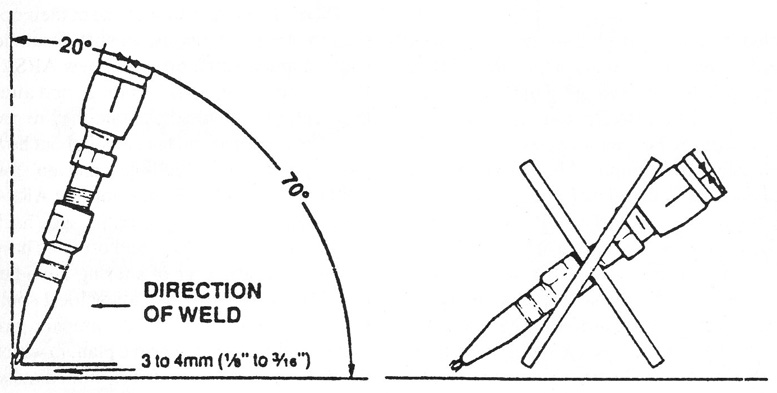 The design and angle of application also greatly reduce the problem of blow-outs of the weld, or of “puddle!”

Experiments were carried out using both the exactness, and inexactness of Boyle’s Law, in particular. The law is exact at low pressures, but at high pressures, all gases are slightly less compressible than Boyle’s Law states.

From this, it was discovered that, if both oxygen and acetylene could be used at equal pressure, low pressure, low volume and equal temperature, then molecular chaos was not the predominant situation, but molecular stability under these conditions was the dominant factor.

Further experiments revealed that, when gas flow, surface flow, orifice shapes and low pressure performances were compatible with each other and occurring at the same time, then molecular chaos improvement to molecular stability progressed great step further to produce in its best form molecular harmonics.

It was found that, when 202 and 2C2 H2 are combined in a condition where low pressure of equal value, true and accurate venturi shapes and orifices have reached a configuration at the same time, then the new formula reads thus:

The temperature rating in this condition is 6860 degrees F, and the flame takes on a new dimension. The flame evaluation is now reacting in the atmosphere, not with the atmosphere, and the nitrogen content is completely eliminated; while the incidence of fluxes, pre-heating techniques, distortion allowances and, in most cases, the use of highly specialized welding rods have been eliminated also.

It has always been an engineer’s night-mare in regards to the high oxidation incidence which occurs during the process of oxygen/acetylene as the equation,

The answer to the problem did not lie entirely in the production of exotic fluxes, greater pre-cleaning methods and, in general, the various techniques required in the inert gas medium.

When the equation 4C02 -I- 2H2 was attained, it was found that oxidation problems were set aside, the destructive forces were basically eliminated, and welding progressed one step further.

Editors note: as we all know, there are many other options available today offering different performance parameters and prices. The purpose of this article is to give credit to an invention that lead the way for all to follow.