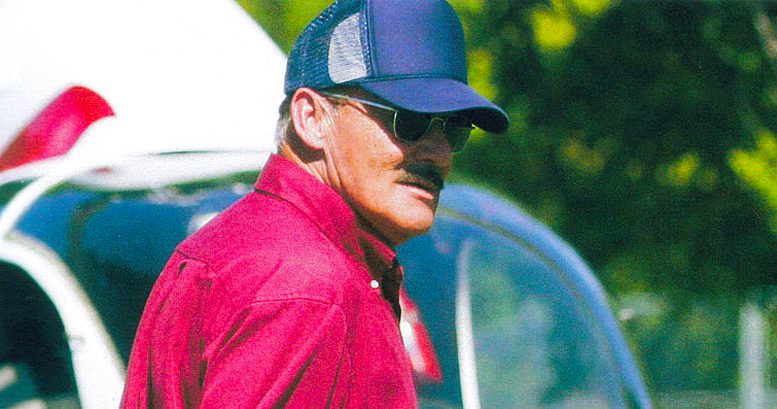 Spotlight on helicopter certified flight instructors – past and present

Frank Sweet, the Man with the Cat Like Reflexes, with his cup of coffee, cigarette, love of helicopters and of his students will be sorely missed.

Today we lost one of the finest pilots/instructors/friends. I got a call today that Frank Sweet from Tulsa Oklahoma died of cancer.

Some of you know Frank, some of you took lessons with him. and some of you probably would never have gotten your license had it not been for Frank. He was the Grand Daddy of all flight instructors and I’m sure he will be missed.

He will always be remembered for his Cat Like Moves while riding with some of you. He would usually wait till you pee’d your britches before he would take the controls from you, buy you never made that mistake again.

He had flown about every kind of chopper they ever made and he had survived several flame outs and other problems in the air. Frank was always at Spurling’s Fly-ins to help out with anyone’s needs concerning flying.

I don’t know what it was about him, but when he was giving you instruction it was sometimes hard to understand what he really wanted you to do, but somehow you always knew what he was telling you anyway, even though you weren’t sure what he said

He is the only Rotorway helicopter instructor I ever saw that would climb in a ship with anyone, have one leg hanging out the side on a skid, a one gallon coffee mug in one hand and sometimes a cigarette in the other, yet somehow get his leg in, secure his coffee mug, and I guess, swallow the damn cigarette and do all this while taking control of the helicopter, if you got out of control.

And I’m stating the out of control lightly. You would definitely be out of control or Frank would never move. One thing was for sure, after you took instruction with Frank you knew what it was like to get out of control in a helicopter, learned how to get that control back and you never forgot it and never did the same mistake twice. He loved helicopters; he loved seeing his students become good pilots.

He was a veteran, flew in every possible condition you could ever imagine, from the fires out west to the oil rigs in the gulf to the conditions he endured during the war. He was a great friend and great man and he will be missed but never forgotten.

I called him about a week before he died and he told me his most prized possession was the Purple Heart that was presented to him by John Spurling at the hospital to thank him for all he had done for the RotorWay/rotorcraft community. He was to receive it at the Spurling Fly-in but was admitted to the hospital that week and couldn’t come. He was missed there and he will be missed forever. Thank you Frank, We love you and will miss you.

The above was penned by “Ausiejhn” a contributor to the MSN Rotorway Forum. Editor’s note: Frank was a pilot’s pilot. Hell, not only that, he was a bunch of fun to just talk to. A real sense of humor laughing at himself just as quickly as laughing at someone else’s foibles… To say I’m sorry to see him go is a gross understatement and he will be missed and missed. 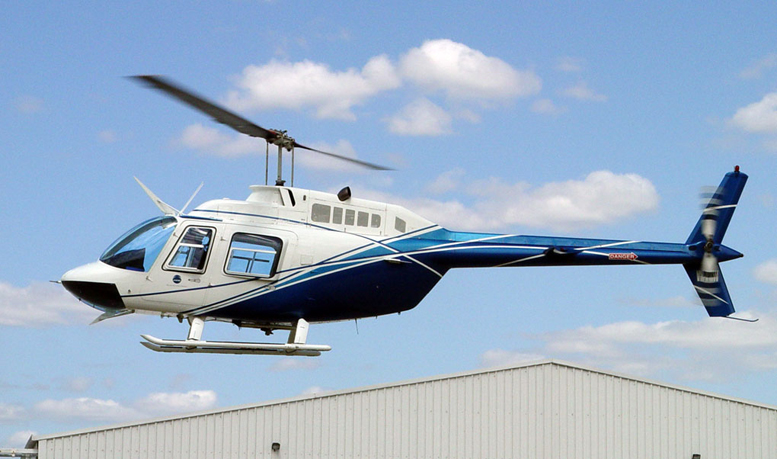 TULSA – A commercial helicopter clipped trees and sustained damage when it attempted to land on a road leading to a Tulsa television station after apparently having engine trouble.

No injuries were reported by the two people aboard the Bell Ranger 206L-3 helicopter owned by Tulsa Security Patrol, which operates a charter service. Damage to the helicopter built in 1989 was described as heavy, according to a preliminary report, said John Clabes, a Federal Aviation Administration spokesman at the Mike Monroney Aeronautical Center at Will Rogers World Airport.

Taha would not identify the two men in the helicopter.

The pilot was Frank Sweet, 53, who was shot down seven times while flying helicopters during three tours of duty in Vietnam, said Bill Mitchell, a newsman with KTUL-TV Channel 8.

Mitchell quoted Sweet as saying he was flying about 300 feet above the ground when he had engine failure.

Chris Keyes, manager of the FAA’s Flight Safety District Office in Oklahoma City, said the helicopter was on a training flight when it lost power and had a “hard landing.” Weather was not believed to be a factor, he said.

The pilot is certified by the FAA as a commercial pilot and as a flight instructor.

Baldwin said the helicopter, which can carry seven people, was coming in to refuel when it experienced “engine trouble evidently.” The pilot attempted to land at one point on the road, but saw a car and guided the craft elsewhere. 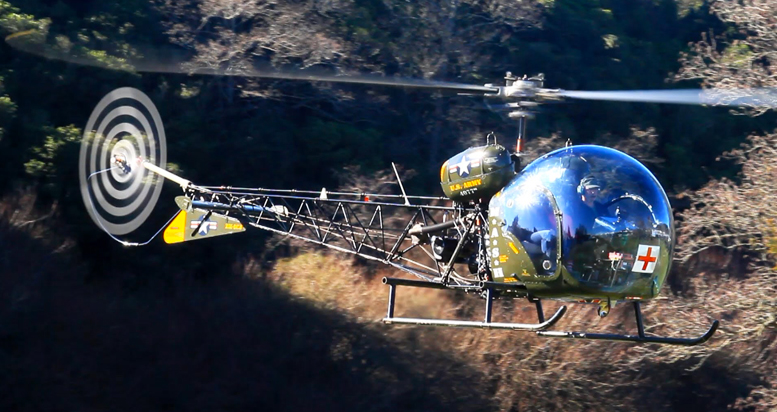 Radio-controlled airplanes were not the only things buzzing the airfield at the Tulsa Glue Dobber’s Jumbo Fly-In, held Aug. 2-3. A few lucky spectators hopped a ride in a full-sized helicopter.

The five-minute, $15 rides were provided by the Double X Land and Cattle Co., a recently formed business of husband and wife team, Dr. Larry Mansur and Elaine Stook-Mansur, of Westport, on Lake Keystone.

The Mansurs began the company in May after acquiring a fully restored 1954, Bell 47, G Model helicopter, the same helicopter filmed in the television show “M.A.S.H.”

The plan is to use the helicopter for a variety of purposes, mainly pilot training, said Stook- Mansur, who is licensed as both a helicopter and fixed-wing pilot.

“We are hoping to pursue other avenues such as contracting for aerial photography, pipeline patrol and air tours,” she said.

The Mansurs have contracted with several commercial pilots to serve as instructors, including Frank Sweet, who piloted the helicopter at the Glue Dobbers Fly-in.

Sweet is a seasoned helicopter pilot with more than 16,000 flight hours, including three tours of duty in Vietnam, Stook-Mansur said.

Sweet will be doing much of the pilot training for the company, she added.

Helicopters have a reputation for being tougher to fly than fixed wing planes, but Stook-Mansur says that “it’s all relative.”

“As opposed to an airplane, where you use your feet for a rudder pedal, one of your hands for controlling the stick and perhaps occasionally touch the throttle, a helicopter requires both feet and both hands all at the same time,” Stook-Mansur, said.

“It is more complicated, and it’s unfortunately not quite as relaxing because you have to stay on top of it at all times,” she continued.

In addition to the training, the helicopter will be used for aerial photography. Another area the Mansurs are hoping to get into is pipeline inspections, they said.

“And, they’ll fly these pipelines on a routine basis just to check to make sure that everything seems to be in order.”

No matter what future services the Mansurs provide with their helicopter, they plan to continue selling rides to anyone who wants to experience the thrill of helicopter flight.

Brian Chapman and his 7-year-old son, Andrew, were among those who took the five minute flight during the Glue Dobbers Fly-In. It was the Chapmans first helicopter flight.

“It was awesome,” Chapman said. “It was absolutely incredible.

I’ve flown in a lot of jets… but there’s nothing like flying (in a helicopter).

“The sensation of flying is so real because you’ve got the large glass dome in front of you and you’re flying so low to the ground,” he said. “And, it’s not like you have to go out and find a runway.

This reaction is typical of those who take their first ride in a helicopter, Stook-Mansur said. 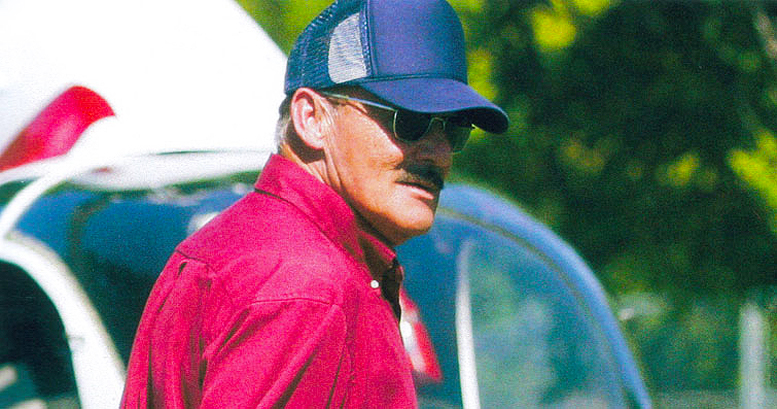 A Pilot – A Life Saver

Be the first to comment on "Helicopter CFI Frank Sweet"