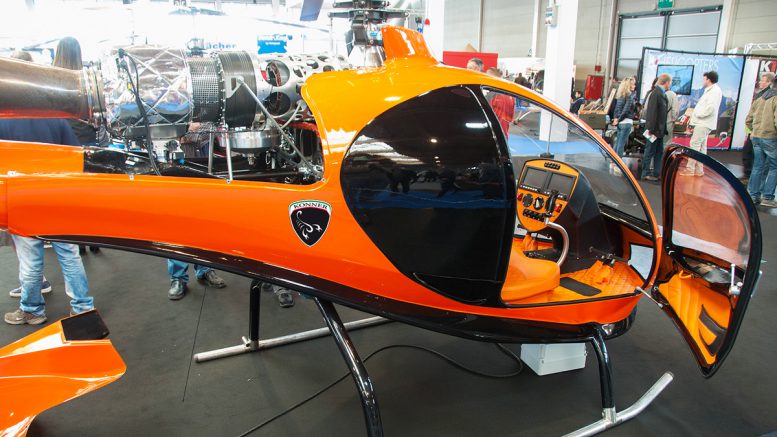 A visual overview of the very popular kit helicopters – the European Dynali H3 and the American Mosquito XE.

Another new European helicopter powered by the four stroke Rotax series with similar size to the Robinson R22 helicopter though looking a whole lot sleeker!

We came across this fine piece of workmanship recently – a homebuilt helicopter powered by a vertically mounted Subaru EA81 auto engine.

This Subaru powered helicopter has a beautiful engine hum and appears plenty stable. This is proof in that a properly set-up Subaru EA81, it is a great little engine to power a homebuilt helicopter. The only problem is they are getting a little rare and old. Trying to find a low mile engine is near impossible though rebuilding still seems an option.

DID YOU KNOW…? Robert Stierlin is one of the few Swiss who designed, built and tested five ultra-light helicopters. This helicopter fan began his activity in 1948 and continued until May 1969 when he vas victim of a flight accident during a flight test. Apparently Robert Sterling was killed flying one of his experimental helicopter machines.﻿

CERN talented mechanical engineer, Stierlin is a pioneer in the civil helicopter leisure and sports , Swiss Amateur 1 helicopter manufacturer who made real flights. He was responsible for putting the helicopters sophisticated technique (mainly reserved for military time) at the specialized homebuilder and air recreation, but also to have evolved, simplify and optimize.

The new helicopter had however some problems with the engine’s cooling system. Its builder probably underestimate the imminent danger and decided to fly again. During the following flight, at an estimate altitude of about 20 to 30 meters, the observers hear the engine’s rpm dropping. It seems that Stierlin did not attempt to autorotate. Few instants later the helicopter crashed in the territory of Grilly (Ain/F) very close to the border between France and Switzerland. Unfortunately in the accident both occupants were fatally injured.

As it is written in the official accident report the pilot was not in possession of a helicopter pilot license, and the helicopter was not registered. As probable cause of the crash there is almost certainly a sudden loss of the engine power. One of the engine’s pistons presented signs of damage (excessive friction).