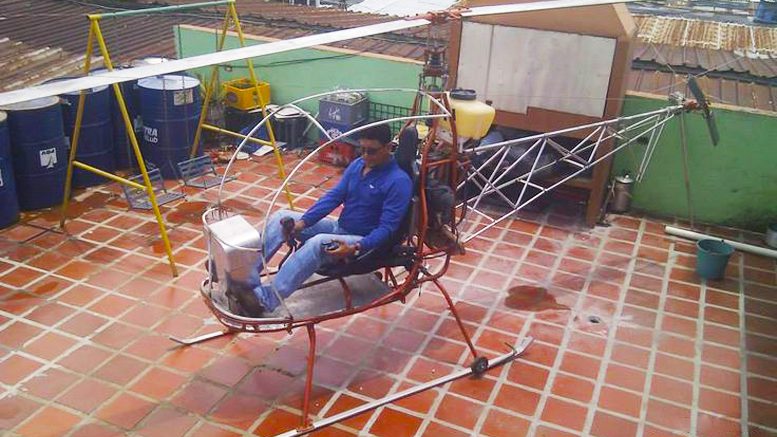 Ben has spent much time and effort to design, test and fly various different “Bug’s”. These designs are super cool keeping things to a minimum but still neat and professional. While this is some older footage, it’s great to see people still doing it “old school” like Ben Shower’s did with his Skytwister.

Ben has since moved on and I believe he is onto Bug number 5 with testing on patent pending rotor systems and other original ideas. He is based in the UK and can be seen on occasion at their various airshows with his chopper/s.

While not the first homebuilt to sport a turbine – (see Cobra Predator helicopter), it’s definitely one of the most interesting with it’s simple design. The design uses an APU turbine, a Yamaha motorcycle final drive for the gearbox, and salvaged auto transmissio0n gears for the reduction drive. See more on Doug Schwochert’s AW95 helicopter elsewhere on this site.

Doug is one of the most innovative “doers” in the ultralight homebuilt helicopter scene of recent time. We are referring to his history of taking the old Choppy/Flying Triumph and remodelling it in to the AW/95. The simplest plans built “real helicopter” available today.

But! not satisfied with that, he took the 2 stroke engine out and put a turbine in that was a very clean looking installation. The main rotor gearbox was a modified motorcycle shaft drive unit, a smart & cheap idea and looking for a lighter transmission with the turbine reduction gearbox being constructed from auto gears.

From the home of Augusto Cicare

This is the prototype of a domestically built experimental helicopter featuring versatility, low cost of manufacture and ease of maintenance. The project will receive grants to continue its development FONTAR.

The helicopter is manufactured domestically missionary and was presented to security forces, commercial pilots, technicians and journalists. The aircraft is the result of a development of more than 30 years of mechanical research from Sorhge Ruben Guillermo Posadas.

The two-seater helicopter has a weight of 400 kilos and can reach a cruising speed of 160 km/h with a capacity of approximately 200 Kilo payload. It aims to become a cheaper alternative to similar vehicles that are manufactured abroad.

Its manufacturer explained that all components of the ship, except the rotors are built domestically. This allows a much lower cost of production compared to importing similar aircraft such as the American-made “Robinson R22” helicopter.

Sorghum also clarified that because it was an experimental prototype, it does not currently have international certifications or require qualified personnel for maintenance which significantly reduces the running cost, already low because of the simplicity of its design. “This model is powered by a Renault 18 car engine, any car mechanic should be able to perform the engine maintenance” said Sorhge.

More information can be found here.

This is the original helicopter flight footage from its first inception.

This is some early helicopter video footage of a pilot test flying the CH-6 helicopter from what is thought to be a rural military field in Argentina. Looking very much of a personal helicopter here, you can see that this little machine though mechanically complicated, it quite lively and nimble. A fun little single seat helicopter.

This has been a long time coming with the experimental helicopter community awaiting the right auto engine to convert. Though some have tried the EA81 in the earlier Scorpion one unsuccessfully, others (Aerokopter) have successfully made a production helicopter using the heavier yet more powerful Subaru EJ25 engine.

I’ve always wondered why we haven’t seen more dhelicopter conversions like this. I do know that Mazda Rotary 13B engines have been used in both Scorpion 2 and Exec’s but have heard little of Subaru engines being used.

This surprises me due to the fact that they are one of the most popular fixed wing experimental aircraft engines with thousands of proven flight hours accumulating daily. Let’s hope we see more helicopter auto conversions? Maybe even a conversion kit for existing helicopter designs?

Watch the tail boom! A little to flexible – possibly requiring some re-design?

It’s great to see these international original idea homebuilt helicopters coming to the scene. We just hope that they learn from their testing? Remember, we are all still pioneers in what we do when designing our own experimental helicopters.

Though the Mini 500 may have had it’s faults well documented you might be surprised to know many other successful homebuilt designs went through similar trial/test/error stages and each took time to perfect (unfortunately the Mini 500 went out of production before these were all fixed).

Let’s support those individuals with constructive help and support so that we all may enjoy their efforts.

Can it get any simpler? Amazing “jump” personal helicopter.

This is just astonishing! The smallest most portable aircraft imaginable. Safety?? Well, you wouldn’t find me in it and I cringe at the thought of what those blades could do should you accidently “tumble” on a bad landing… Still, credit to peoples ingenuity.

Are you from an engineering background? No? well don’t consider this homebuilt helicopter design. While it is a brilliant idea and was the proving ground for the Cicare CH-6 and CH-7 (plus Mini 500) helicopters, you may find it is extremely technical and complicated to build.

Not for the feint at heart! Originally from the Cicare camp, marketed by Osvaldo Durana at Plans Delivery and some how ended up as the SkyLark at Vortech? It is a great read to study these plans and well worth the purchase if only to study the strong airframe structure.