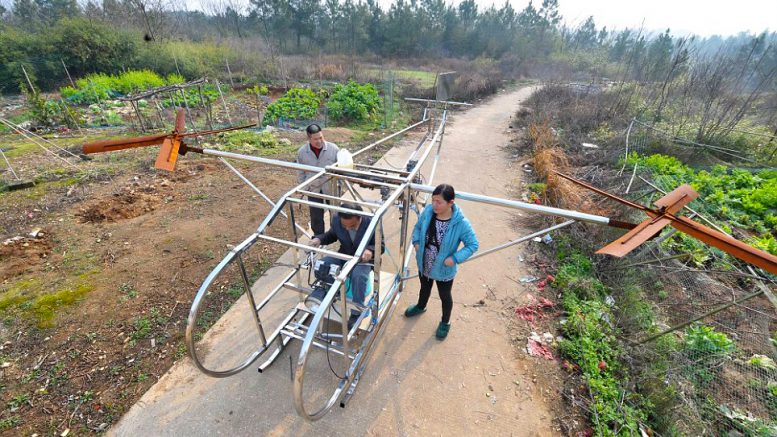 While we love seeing some of the engineering marvels that come out of Europe, especially the eastern sector, there is much to be said for their value on life as seen here in these hover training scenarios.

We do not encourage these practices, though many have indeed learned and taught themselves to fly helicopters this way but when you land at the local airport and are asked for your “pilots licence”, don’t expect a favorable reception.

VIDEO: Eastern Europe Homebuilt Helicopter Part 2 of the above….

So does he get airborne? No more tethers?

Fortunately the tethered practice has paid off for this would be helicopter pilot. To his credit, he has picked up the piloting bug quite well, not to mention the obvious successful design of the helicopter itself though in early hovers it looked a little tail heavy?

I just love the old school looks, simple layout and the beefy sounding four stroke engine at work while this “tricycle gear” helicopter buzzes around the field only a foot or so off the ground. Surprisingly avoiding and dynamic roll-over situation!

Now this is one I could definitely see kitted up, a great looking personal helicopter!

It seems these designs can’t keep away from Russian type military helicopter look-a-likes. Wheeled undercarriage and similar lines though with a much more appealing look than some of the rustic home built helicopter designs. Two stroke powered, light and simple.

A Rotorway Scorpion 2 seat helicopter with an unusual Volkswagon (VW) engine installation that seems to incorporate the original gearbox/diff/drive assembly and appears to be rotated 90 degrees to get the output shaft vertical.

It’s at nearly gross weight before the pilot steps in and can only fly for 15 minutes, but that’s not the point. Sikorsky Innovations sees the Firefly as a testbed for the technologies that may make for a real electric helicopter … someday.

James May reports on the World’s smallest manned helicopter, developed by GEN Corporation.

This neat little helicopter design has been around for a number of years now but has yet to go into full scale commercial production. It has flown many successful flight hours to date. The single person helicopter uses multi-engines and has been seen at multiple airshows across the world. The manufacturer is based in Asia.