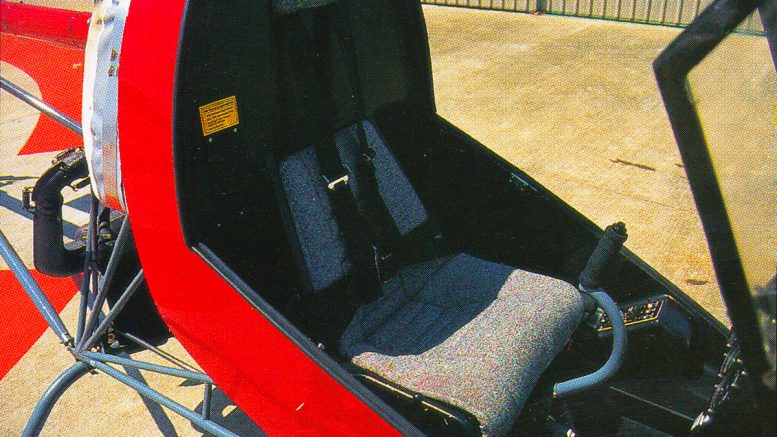 Considering a CH7 helicopter? In today’s world of high technology in aviation, the term “affordable helicopter” hardly has a place. It’s no wonder that the smallest and cheapest commercial production-built helicopter on the market, the Robinson R22, is also the highest selling helicopter in the world. Yet even the R22 will set you back over $200,000 new and this is what most would-be owners and fliers find ultimately too prohibitive. 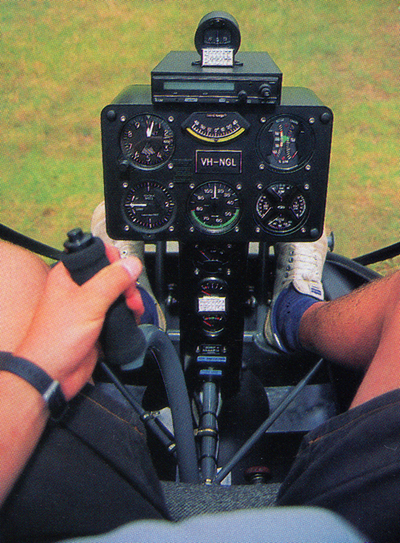 As a consequence of such excessive costs the helicopter industry is witnessing the arrival of an increasing number of new designs aimed at bringing both purchase price and operating costs down drastically. Characteristically, all of these new designs are single-seat, home-built, and run on two-stroke power.

Now whilst the merest mention of home-built aircraft causes many to turn and walk away, one of these little designs really does seem to offer some radical improvements on the standard fair in the home-built arena. It is the Italian CH7 Angel and it’s the first of its ilk to begin a test-flying program for Australian certification.

The Angel is the brainchild of Augusto Cicare, a native of Argentina with a 35-year history in helicopter design. Some of the helicopter’s components are manufactured in Italy by Elisport, with aerospace companies in Europe and the USA being subcontracted by Elisport to produce the rest. The whole package is presented to the purchaser in kit form and takes little more than 100 hours to put together.

At the time of writing there were two examples of the Angel in the country. One of them was purchased ten months ago and was nearing completion. The second aircraft is being used by its Australian distributor, Pacific Flight Systems (PFS), for type certification and demonstrations to prospective buyers. Carl Braden and John Hajje formed PFS to represent Elisport and market the Angel in Australia.

Pitch change rods are mounted inside the main rotor mast. While this system reduces drag and improves safety, it also add to it’s unique stability and reduced vibrations through the control rods.

Pacific Flight Systems spent a painstaking 18 months putting the first Angel together. “The CAA [now CASA] watched every step very closely, right down to removal of the aircraft parts from the shipping crates,” says Carl. “We acknowledge that CASA has a great responsibility in the certification process and that demands their close involvement in a project like this. They have been very helpful since the beginning and we have a good working relationship.”

When the certification process is complete the CH7 Angel will fall into the Amateur Built Rotorcraft category and will be sold in kit form. However PFS is careful to point out that the helicopter is not an ultralight and will carry ‘VH’ registration. What is instantly noticeable about the helicopter is its eye-catching styling. It is an exercise in minimalism, not only in its size, but also in the uncomplicated lines and this is no accident.

They say there’s nothing like an Italian suit and Cicare seems to have been a major exponent of this adage. Rather than cladding the Angel in something functional he contracted Marcello Gandini to do the styling. To date Gandini’s design achievements include the Lamborghini Miura, Countach and Diablo, and the Lancia Stratos. 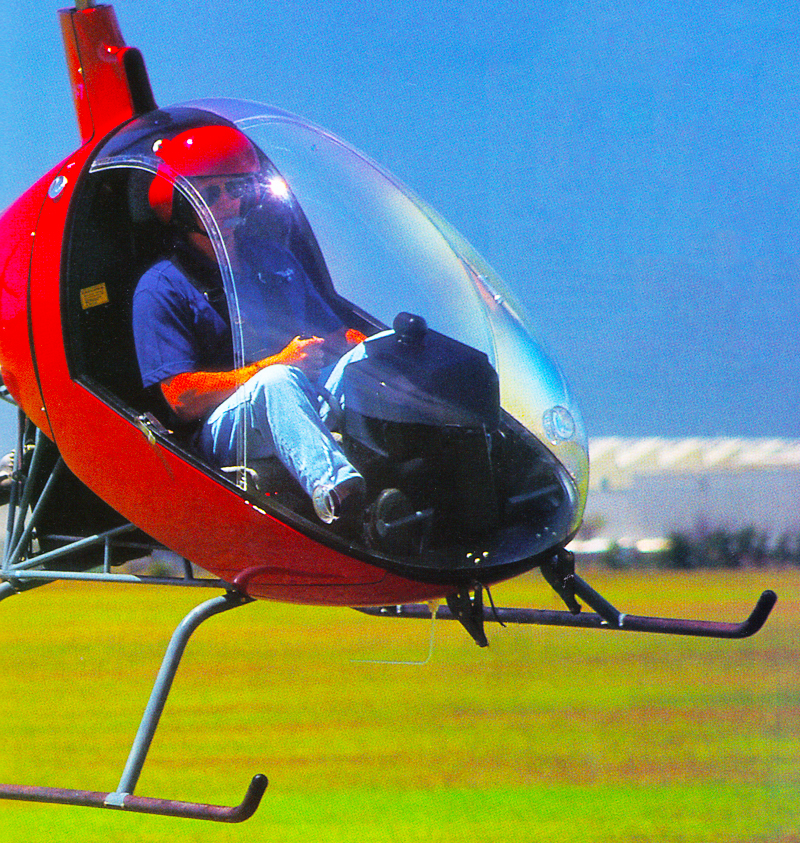 The canopy is the dominant section of the overall fuselage. Rather than obstructing the shape or compromising structural integrity with doors set into each side, the canopy is hinged at the chin of the helicopter and the whole section opens to enable entry and exit.

The fuselage is formed from a kevlar-based composite and the engine cowl is a single unit which can be removed in an instant to expose the engine, drive systems, fuel tanks and exhaust. The lower sections of the engine and airframe are left in the open air in the style of the R22.

In the “hot seat” the field of vision is remarkable. Even the instrument stack, sitting between the pilot’s feet, is mounted low and well out of the way whilst remaining within easy reach. Ignition, clutch engage lever, and all switches, are located in small panels beside each knee. Ventilation in flight is provided via adjustable circular inserts mounted on each side of the canopy.

Whilst no position adjustments can be made to any of the flight controls, the layout is extremely comfortable and the seat is every bit as good as those found in any of Gandini’s other masterpieces. Standard instrumentation includes ASI, altimeter, engine and rotor RPM, VSI, temperature indicators for engine, carburetor and exhaust gas, and voltmeter.

In engineering terms there seems to have been a remarkable amount of effort put into designing the Angel and many of the major components have come from a clean sheet of paper. Cicare wanted to simplify the basic mechanics and control systems fundamental to rotary wing aircraft. 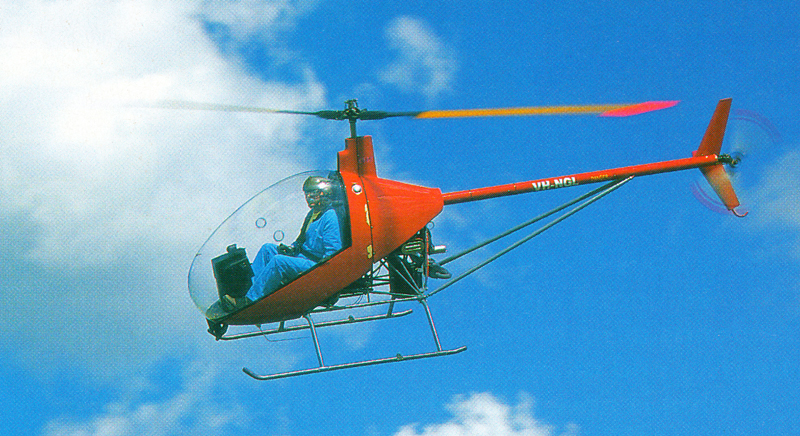 The airframe is nitrogen-pressurised and monitored by a small gauge in the cockpit.

He started by paying close attention to the typically complex systems making up the rotor head, removing the swash plate and replacing it with his patented “Spider” system, located deep inside the airframe, beneath the mast and transmission.

Cicare claims that his Spider arrangement is safer than conventional swash plate systems through its shear simplicity. It has also been effective in minimizing vibration emanating from the head. The system links the cyclic and collective controls with the rotor system by sending the linkage arms up through the hollow rotor mast and out the top to connect with each main rotor blade.

The main rotor blades are of composite construction with foam core. Each blade has a lead spar running along the leading edge and the rotor system is able to build up plenty of inertia if needed for autorotation. The blades are also asymmetric in shape, a characteristic not common to rotary wings.

The Angel’s airframe is of chrome molybdenum construction and is welded to form a continuous closed frame. A major innovation here is that the helicopter airframe is pressurized with nitrogen to enable easy checks on structural integrity.

A gauge mounted on the frame, just forward of the seat, provides an indication of the nitrogen pressure in the frame. Should the reading drop, it is likely that there is a fault somewhere in the structure. In an aircraft of this size, many pilots will surely find this a welcome safety feature.

The two-stroke, liquid-cooled Rotax 582 engine is matched well to the airframe to produce good performance figures (see data box), and the light-weight airframe makes the helicopter an agile little flyer. Bankstown-based Aero Heli Services has been contracted to work on the training side of the Angel’s introduction and Chief Pilot Steve Dines has done around six hours of flying in NGL.

“I got a big surprise on my first flight,” says Dines. “It is very easy to fly — stable and not nearly as twitchy as I’d expected. One of the real advantages in an aircraft like this is that you are right in the center of things rather than being off to one side.” This certainly adds to the ease of control.

Dines is also keen on the engineering and thought that has been put into the Angel. “The engineering is brilliant and the power-to-weight ratio is better than I thought it would be.” He is however, emphatic that the Angel is not a toy. “The size of the helicopter will probably have many people thinking that they can get right in and fly away. But the fact is that this is a real helicopter and, just like any other helicopter, it requires a significant level of skill to handle it.”

Overall, Dines is full of praise for the little Angel but did offer comment on one aspect of its cockpit. “It will possibly require some modification to make it more suited to Australian conditions, particularly if it is going to be used in a mustering role. Pilots may want more ventilation in forty degree heat and a shade panel painted in may also improve it.”

Pacific Flight Systems have anticipated such responses from pilots and are in the process of designing a canopy with large cut-outs on each side which should also enable entry and exit without having to open the entire structure. “With a few mods like these, the Angel is likely to be good in roles like mustering, stock monitoring and transport over the large areas that many properties cover.”

Watching the Angel perform, it is easy to see why pilots’ comments have been so positive. In fact the Angel has been demonstrated at two Australian airshows to date and, on one occasion, was one of only two aircraft able to strut its stuff in a 35 knot cross wind — an impressive performance to say the least, particularly given its size.

One caution though, the rotor system on this machine is at eye height and walking in under the spinning disc demands crouching to avoid being hit. This is an area that PFS is acutely aware of and is intending to offer high skid gear as an option to buyers. Whilst construction of the Angel is totally in the hands of the owner-builder, Pacific Flight Systems is cautious about safety issues surrounding home-built aircraft.

“The last thing we wanted to do was bring an unsafe aircraft onto the market and, while many hours have been accumulated in Angels overseas, we want to be sure that CASA is satisfied with the helicopter’s mechanical and structural integrity,” says John Hajje. “This is the main reason why we aren’t taking any deposits from potential buyers before certification is complete.”

The single seat layout in the Angel also required thought in terms of training and Hajje and Braden have worked out a good training routine with Aero Heli Services. Steve Dines has set about designing a training program for owners.

“The Angel is basically an easy helicopter to fly. It’s a very mature aircraft — all its systems are simple and robust and the engineering and design is remarkably sophisticated,” Dines says.

“The performance is very similar to the R22 and the feel of the aircraft resembles that of the Hughes 300. Pilots new to the Angel will recognize this very quickly and so it is not likely to be a quantum leap from their prior experience.” Carl Braden and John Hajje have put in a great deal of time and preparation to ensure that the Angel is well received by the aviation industry in Australia.

So far it has attracted strong interest and they have a growing data base of potential buyers. Ultimately they would be happy to achieve five sales per year but if the level of interest so far demonstrated in the Angel is any indication of the future, they may go well beyond this.

That, together with a comparatively low purchase price and the high level of engineering built into the machine, makes the Angel a very attractive little package. With Australian certification behind it, this helicopter is likely to be a hot item for people who use helicopters in these roles. 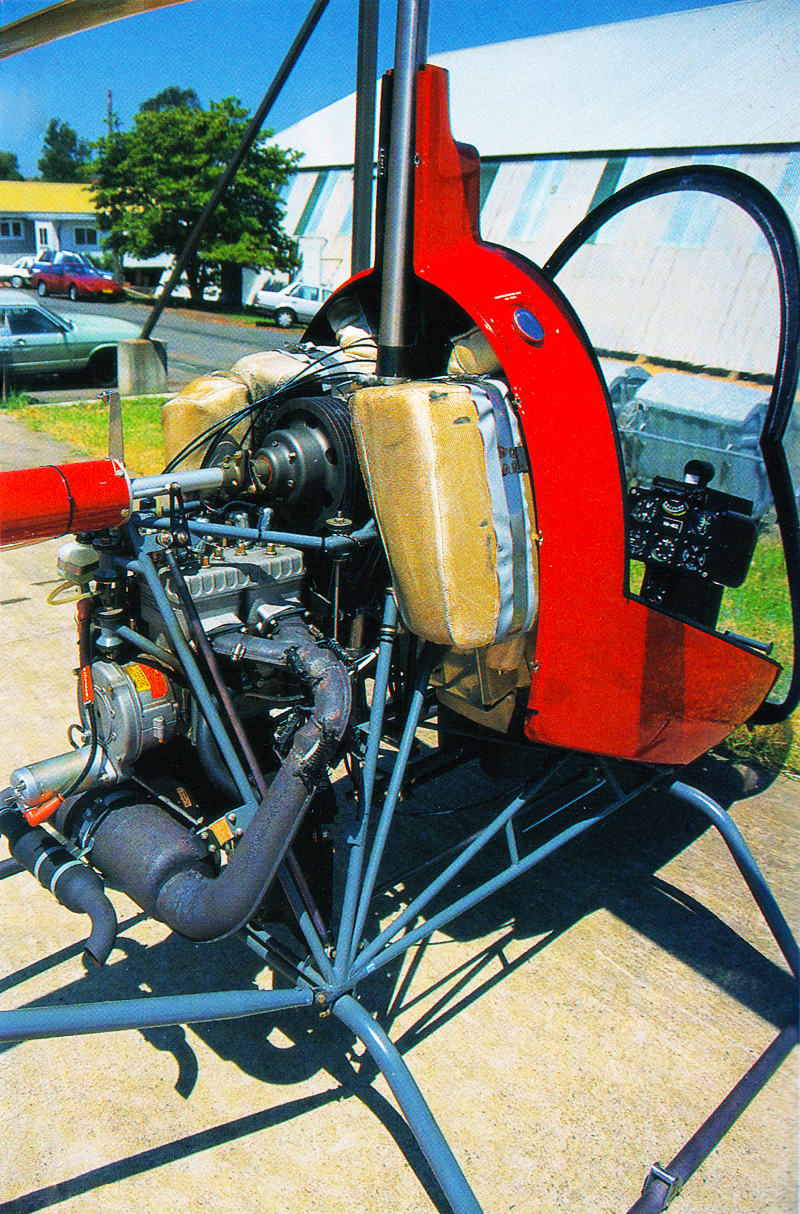 Fuel tanks are covered with a fire-retardant material for added safety.