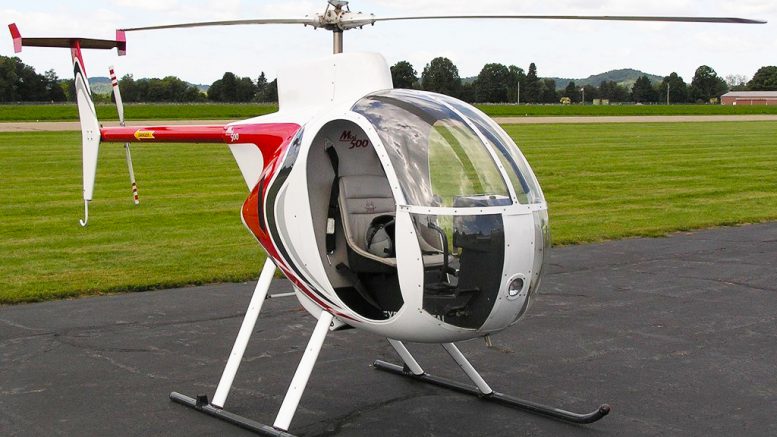 FINALLY, A NEW HELICOPTER YOU CAN AFFORD!!!

The first new Mini-500 shown in the photograph nearing completion, was pulled off the production line and displayed at the 1991 EAA Fly-In in Oshkosh, Wisconsin.

“We just made out 52nd sale and many of these customers should expect to receive their aircraft sometime by the end of this year,” said Dennis Fetter, chief designer and president at Revolution Helicopter Corp.

“The interest in the aircraft has been overwhelming!”, Fetters said. “Although RHC anticipates an extremely large domestic market, surprisingly, two thirds of its advance sales have been overseas”, said Fetters.

RHC makes the Mini-500 affordable and practical for almost anyone to own their own helicopter. Before, it was impractical because of the tremendous expense involved in operating and maintaining a helicopter.

“The total design spectrum of the Mini-500 is a one-man utility and sport aircraft providing true helicopter capabilities and performance”, Fetters said.

The Mini-500 is inherently more stable than helicopters of its type primarily because of the new patent pending control system. The use of this machine is only limited by one’s imagination! Already inquiries and purchases have been made for recreation, commuting, agricultural, medical, traffic and border patrol, among others.

Dennis Fetters is still contactable at http://www.fettersaerospace.com/ though the Mini 500 is no longer in production. 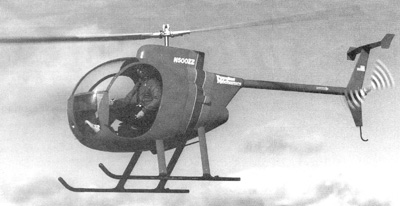 Our hats are off to the fine folks at Revolution Helicopter, for having the foresight and ingenuity to survive the great midwestern floods of 1993. Production facilities have moved to higher ground and we are happy to be able to report that all is well in Revolution land.

The Mini-500 is a single-seat, metal-and-composite helicopter with some impressive statistics. And it looks real good, too. Optional equipment being planned for the future includes: floats, a cabin heater, and auxiliary fuel tanks, but as it stands now, all available equipment is standard.

Powered by a Rotax 582 producing 67 horsepower, the Mini-500 looks and acts like a real helicopter. The machine stands 8 feet 1 inch high with a length of 22 feet 6 inches, and weighs in at 330 pounds. The two-bladed rotor is 19 feet long. Control inputs are accomplished via traditional collective, cyclic, and anti-torque pedals.

Sounds like a real helicopter so far, doesn’t it? Top speed is listed as 95 mph, cruise will work out to 75. Fifteen gallons of fuel can be carried on board, giving the bird an ultimate range of 225 miles while burning unleaded auto fuel at the rate of five gallons per hour.

The climb rate isn’t bad, either: 1100 feet per minute with vertical takeoffs and landings. Maybe the two most exciting aspects of the Mini-500 are the facts that the kit comes complete, which means the kit cost and the cost to complete it are the same.

You can interpret this as: the engine is included in the kit. The estimated time to build this sucker is pretty impressive too-only 40 to 60 hours. Just think: one good week off from work and you could be flying your own personal helicopter.

The kit price is $24,500 (1994 prices)complete-as I said, that’s the only way it comes. Info packs are $15 and the video (also available in PAL) is $30. Technical assistance is available to builders that hit a snag through a hot-line service operated by dealers and the factory.