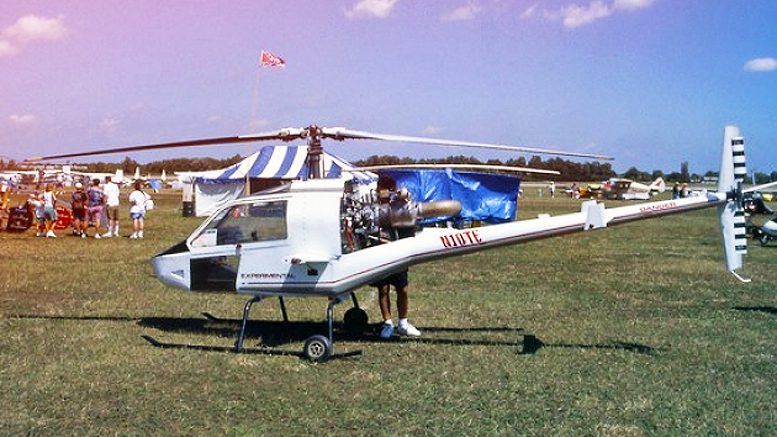 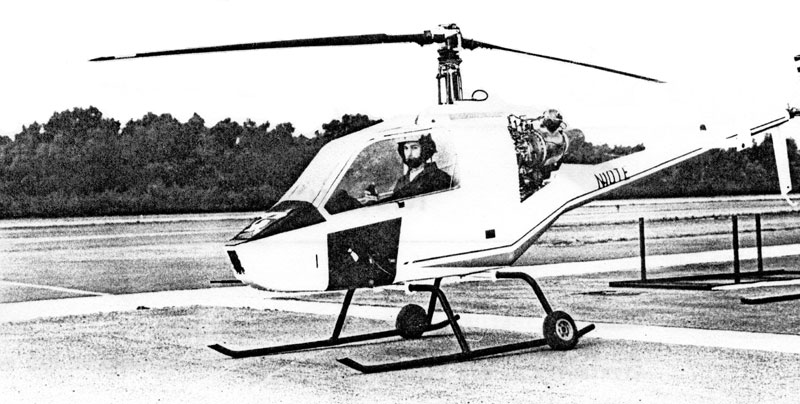 THE ROTORMOUSE HELICOPTER: This is a collection of articles and correspondence with Don Hillberg on his awesome RotorMouse turbine helicopter.

“What I have here is a single place turbine helicopter, the RotorMouse EH 1-01 prototype in testing at Corona, California.” 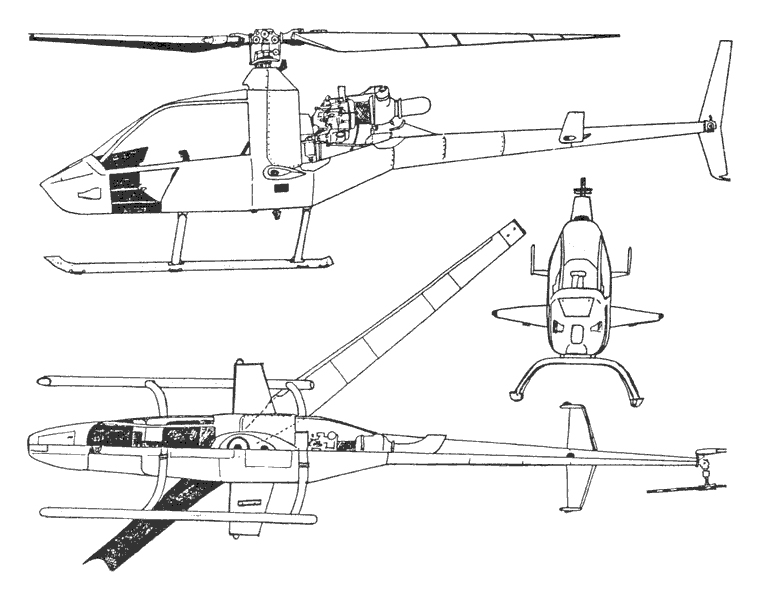 EH-1-01 Rotormouse prototype testing was started – April 8th 1993. The forerunner of the Mini Huey Cobra, the Rotormouse has the same attributes as it’s larger counterpart. A new two – seat version will be in production soon after.

The EH 1-01 RotorMouse plans built helicopter gives more freedom to fly at a significantly reduced maintenance cost on reliable turbine power. The running gear is from the well proven Robinson R22 helicopter with the body being aircraft grade aluminum monocoque style (an aircraft or vehicle structure in which the chassis is integral with the body). 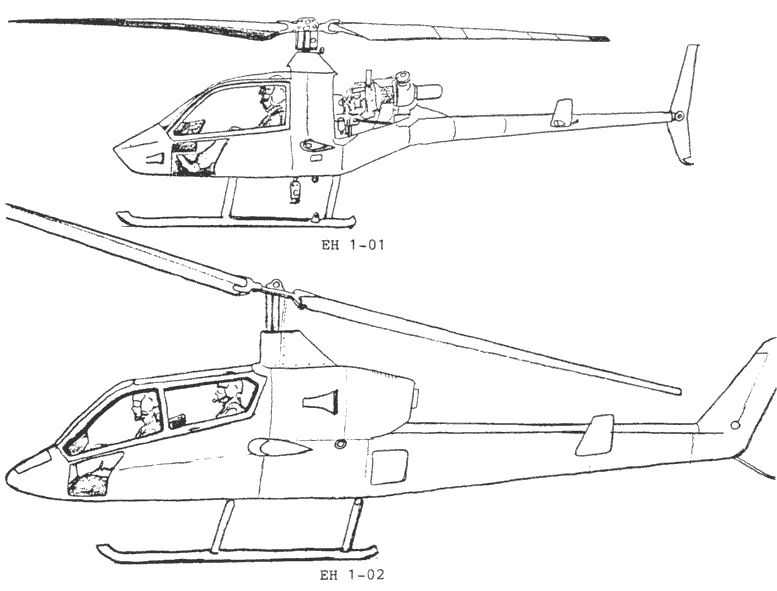 The forerunner of the Mini Huey Cobra helicopter, the RotorMouse has the same attributes as it’s larger military counterpart. Drawing on the narrow profile and mechanical layout, the RotorMouse draws close comparison on its profile. Adequately powered with plenty in reserve for lifting purposes, this turbine helicopter is simple by design and extraordinary in performance! 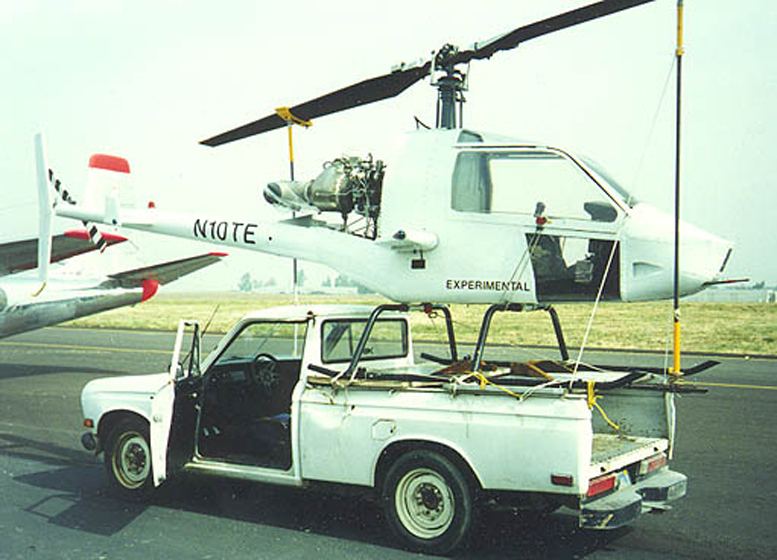 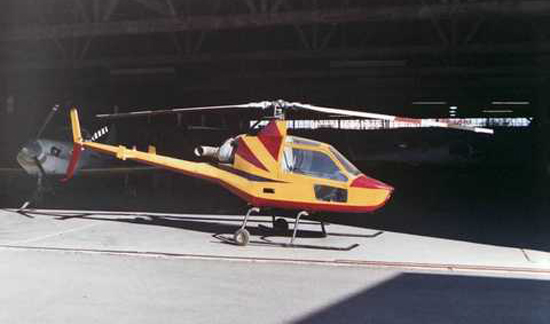 Both are of semi-monocoque construction from 2024-T3 aluminum sheet resting on steel cross tubes.

The dual prototype construction is expected to start shortly.

Don Hillberg can still be found on many of the rotorcraft forums and actively working with his helicopter designs. Helicopter plans and kits are available: contact Don for further details. Also, expect to outlay some money for this design, but then again, you get what you pay for! ….and this is money well spent.

Don’s trip to Oshkosh by invitation of NKG. These TV excerpts are the only official footage of the 1995 EAA gathering known to exist, featuring the program host, narrator, EAA founder, the RotorMouse helicopter and Don.

SO CAN YOU TELL ME WHAT HAPPENED? 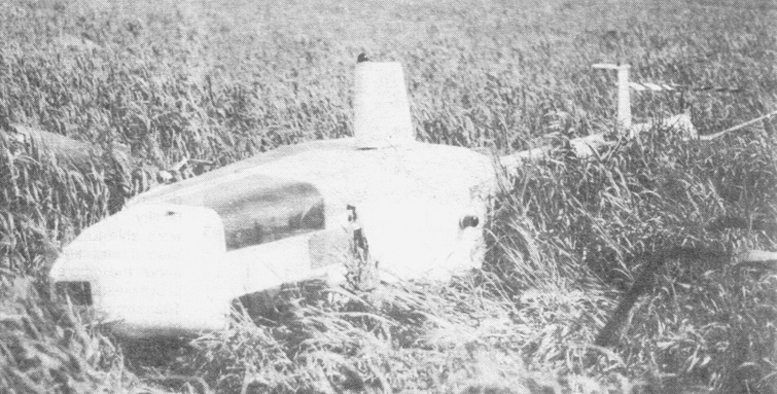 I can say that answer in three words. Vortex Ring State.

When the air going “down and out” gets going “up and in” with the tip vortex, the result is reduced lift.

With both helicopters side by side at idle. We spooled up and lifted vertical to 500 ft. (both sitting at zero air speed). We nosed over to 60 mph and started the cameras rolling.

After doing some laps I lowered the collective and parked in a hover over a field south of the airport, and like a dope put my tail in the wind. I saw the Jet Ranger helicopter to the east as I taxied to the centre of the field (remember tail to the wind), the RotorMouse settled, 15 feet high, 35 mph ground speed, zero air speed, classic settling with power.

I figured no sweat, I have a giant field under me, totally flat. A run on landing was started but wasn’t finished. The right skid dug in after I set the RotorMouse down. The only clue from my view was the earth tilting to the left 5 – 7 – 10 degrees, collective was down, cyclic full left, throttle off, 15 – 25 degree, dynamic roll over! 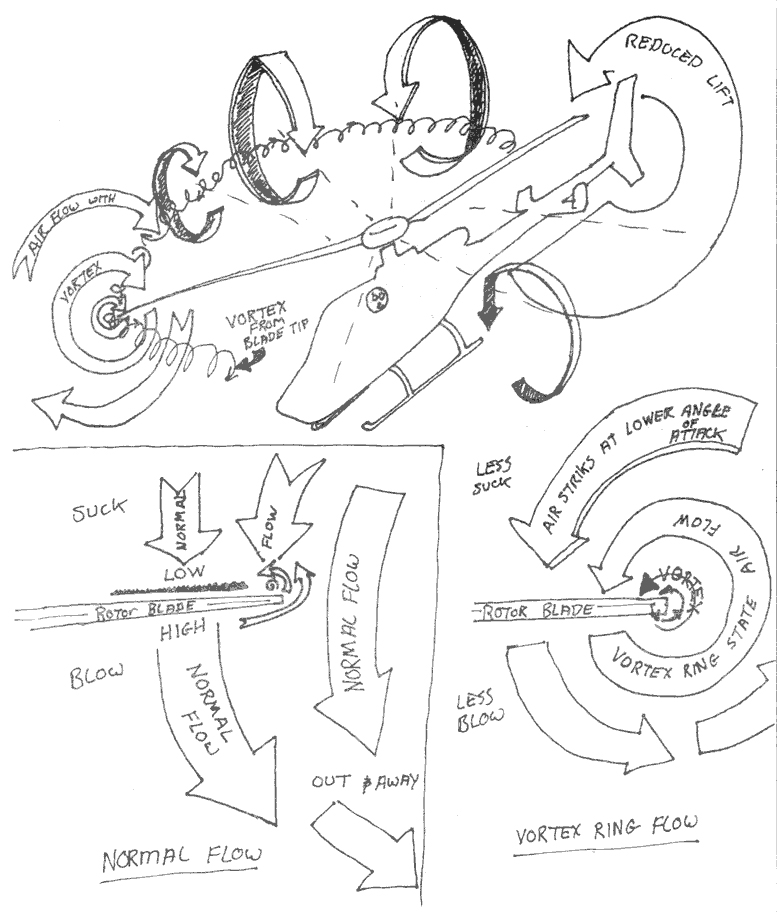 So does anyone have a set of Rotordyne QH 50 blades?

Vortex Ring State. Settling with Power, what is it?

As you know, when a lifting surface produces lift, the lower side has high pressure, the upper side has low pressure and at the tip of the wing the two meeting twisting into the distinctive shape that makes, for an airplane, a problem. But when the air stream is reduced (300 fpm decent or less, still air, low air speed).

The vortex of each blade add to each other and grow taking a portion of the air stream with it. As the vortex spins from high to low pressure so does the flow of air, and you know when air strikes a wing at a lower angle of attack it makes less lift.

The air with the vortex strike the rotorblades from above reducing lift, you have settling with power. (Note: it can happen in autorotation at the flair portion of the manoeuvre, if you yank on the cyclic too hard too late).

The signs when in settling are hard to feel, the controls get sloppy and feel like it takes more to get less done.

The rate of descent starts to increase and the helicopter flounders under power, you think someone has added 100 lbs to the chopper. 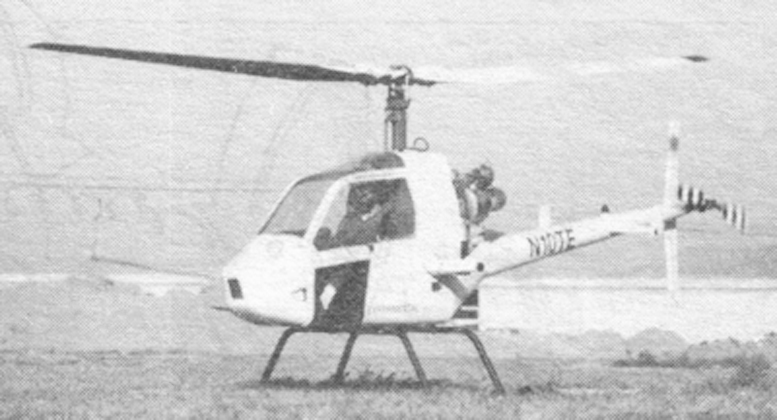 To get out of it? – Fly, forward or into the wind get some fresh air flowing through the system. Leave the vortices behind. Better yet, don’t put your tail into the wind with no room to recover.

So remember, when settling is felt

3) get fresh air into the system ie: nose into the wind.

Avoid slow and low flight with no known wind direction.

Remember that recovery will take altitude. Avoid collective in recovery, it will add to the vortex and you will only settle faster.

EDITOR: All credit to Don and his story, though a little embarrassed, not ashamed to admit the error. Something you don’t see often from over-proud pilots. Some learn by their mistakes, some don’t – as for Don, years have passed and to date he hasn’t repeated the same maneuver. 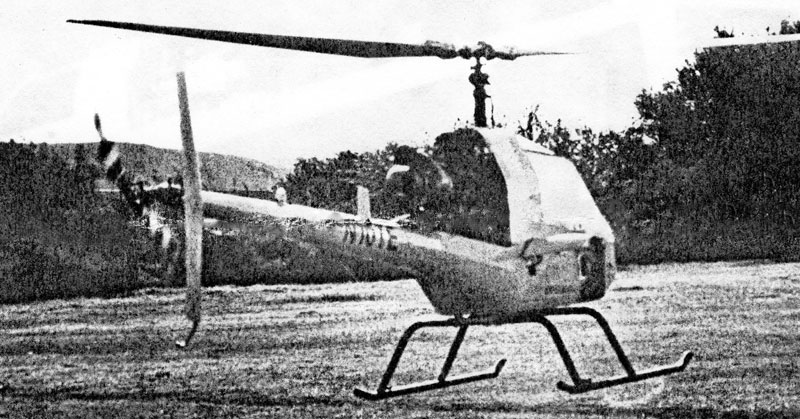 This was not the only unintended flight/crash testing to take place with the RotorMouse helicopter. Don wrote me about his trip to Florida…

…As for my trip to Florida, it wasn’t too bad. No sleep, 2500 miles flying (one way) – running out of fuel at 30 feet and ZERO airspeed calling for a hovering auto….vertical!

Cushioning the landing with collective, bending the skids, watching everything slow down and at less than 50% rotor RPM, when I least expected it, the wind got under the rotors and the RotorMouse rolled up on it’s right skid, hesitated in a balance for a second – and then the blade tips touched the ground and she fell over on her right side.

EDITOR: Again we see Don’s honesty in the details of the crash. Though he doesn’t mention why he found himself in the situation – running out of fuel? What we can see is one robust little machine.

How many helicopters do you know that have taken not one, but two “beatings”, let the pilot walk away, and be returned to flight status…?? If I wanted a tough, fast, reliable single seat turbine powered helicopter, this would be it! 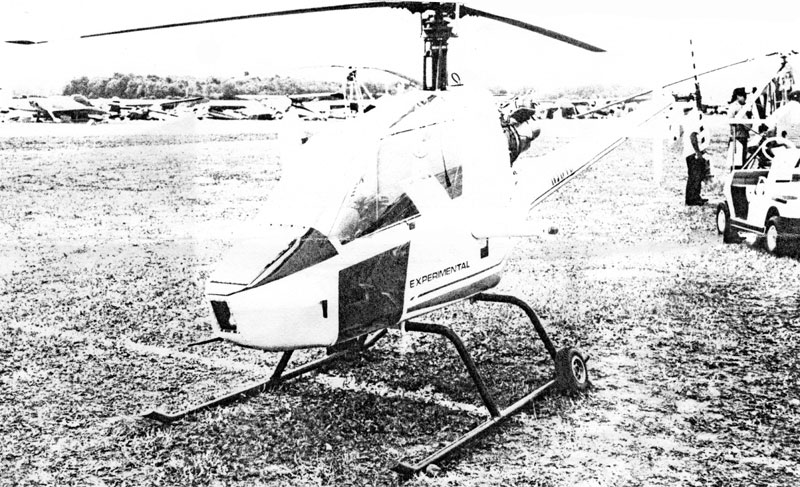 Locating a turbine engine for your helicopter sounds easy enough, but they never seem to be around when you need one.

Early on (many years ago now), you could pick up these turbines for as little as $500 at auctions but over the years, people have become aware of their true value in re-purposing for small helicopters and fixed wing aircraft.

In fact they are so popular that they have now become standard equipment on the Helicycle Kit Helicopter and are offered as an option for the Mosquito Helicopter Kits.

As for power plants, you can pick up “TRADE-A-PLANE” (Crossfied, Tennessee) and pick up a useable APU turbine engine for about $2,000 for a 100HP unit at 75lbs weight, or pay around $3,750 for 150HP at 125lbs weight. You can also shop around with the AeroTrader or other aviation publications. Most are military surplus, so if you know anyone in the armed forces mechanics division, maybe they can point you in the right direction. 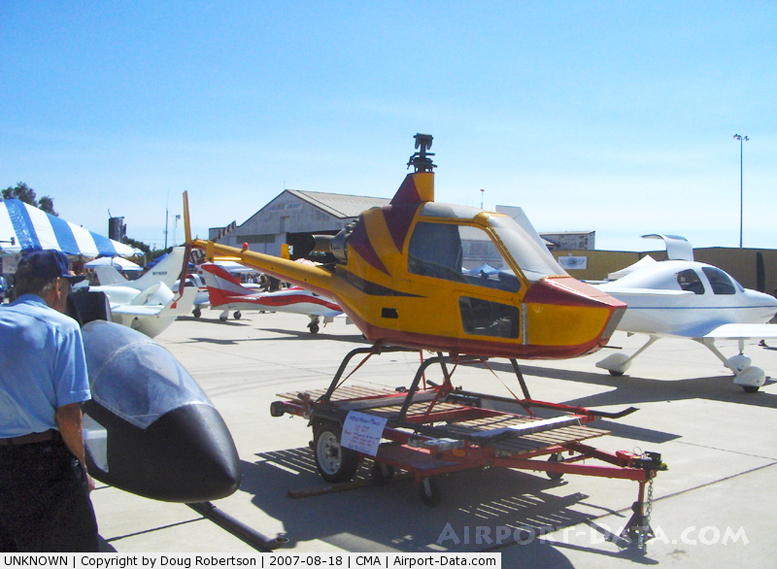 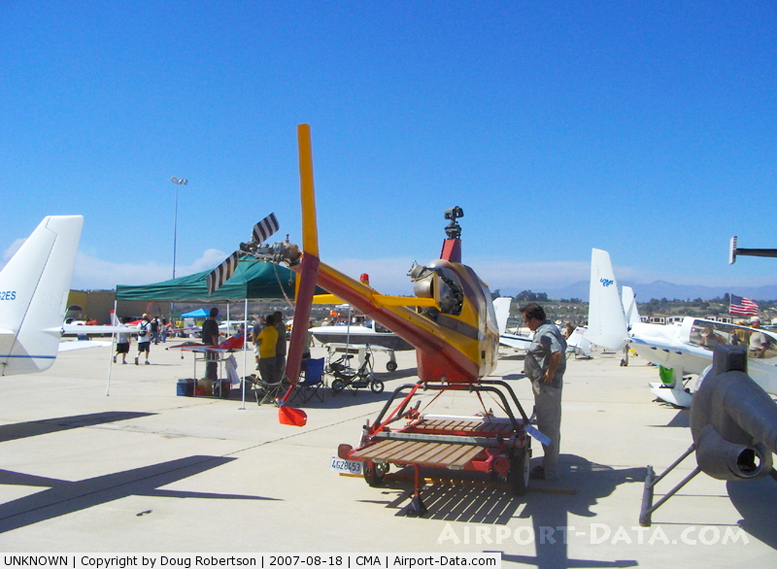 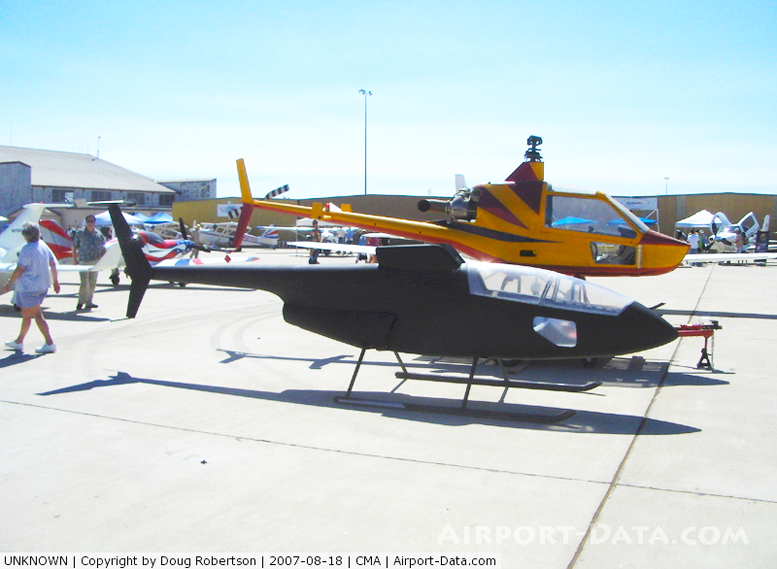 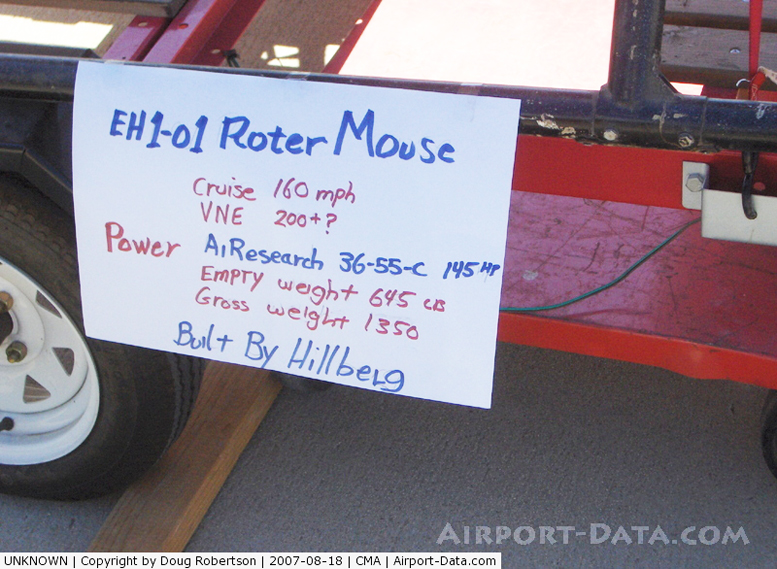 ▣ ORDERS WILL BE PAID IN ADVANCE, OR IN 30% INSTALLMENTS

NOTE: THIS IS THE BASIC PRICE LIST REVISION AS OF OCT 1994 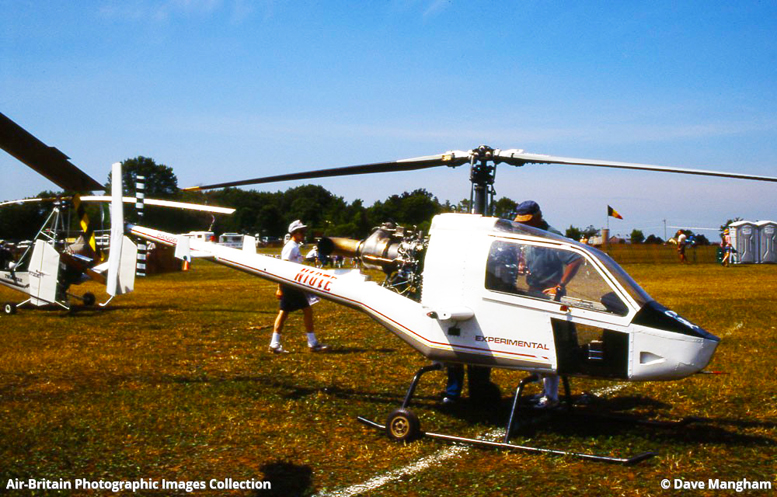