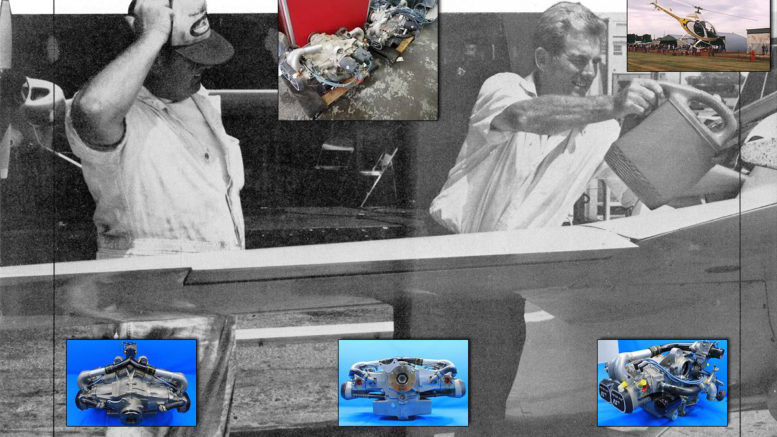 An update on Rotor Way’s RW-100 engine for homebuilts

Homebuilders are an innovative group, but they can’t build their own engines. Continental and Lycoming are effectively ignoring builders’ needs for a new engine, and it’s becom­ing more difficult and expensive to find one that is suitable.

Naturally, then, the promise of a new aircraft engine is al­ways big news and no doubt accounted for the popularity of RotorWay Air­craft’s forum at Oshkosh this year. For most builders, it was their first chance to see the RW-100, a new en­gine in development for homebuilts.

The RW-100 is a derivative of RotorWay’s RW-133 engine that powers the RotorWay Scorpion II helicopter. That engine began development in 1973. Late last March, the Air Progress editorial staff was invited to RotorWay Aircraft in Tempe, Arizona for a first­ hand look at the RW-100 fixed-wing engine.

We saw the prototype engine and witnessed a runup on the dyna­mometer. We also saw a foundry where castings were being poured, an operat­ing machine shop equipped with computer controlled metal cutting machin­ery, lockers full of dies and molds for forming parts, and shelves that were beginning to fill with a growing inven­tory of components.

In short, we saw a factory that was gearing up to prod­uce its new engine. B. J. Schramm, the President of RotorWay, told us then that he hoped to make his first de­liveries at this year’s Oshkosh show. 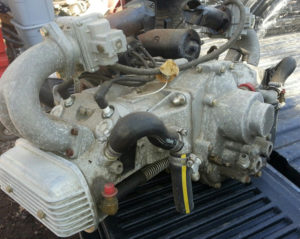 The RW-100 will be unique as a production engine for lightplanes because it is water cooled. The key advantage of a water-cooled engine is that it is more fuel efficient than a compar­ably rated air-cooled engine.

The air-fuel mixture in an air-cooled engine has to be richer to help cool the engine. In a water-cooled engine, radiator placement can be a problem for some aircraft designs, but the key disadvantage is the added weight of the coolant, water jackets, radiator and other cool­ing system components.

RotorWay claims to have gotten around the weight problem by using thin-walled castings. The result is a 133 cu. in. displacement engine with a dry weight (including starter and dual magnetos) of 185 pounds. Add a 7 amp alternator, mechanical fuel pump, tuned exhaust and operating cooling system, and the weight of the RW-100 climbs to about 220 pounds.

At the time of our visit, RotorWay claimed a power output of 100 hp at 3400 rpm. By comparison, the Continental 0-200 air­ cooled engine with starter, alternator and fuel pump weighs about 230 pounds.

The 0-200 also produces 100 hp, but at a lower engine speed of 2750 rpm for better propeller efficiency. Still, Schramm says that the RW-100 is suitable for installation in any aircraft design that will accept the 0-200.

We have watched the RW-100 pro­gram with interest since our visit to Tempe. Two prototype engines have been involved in aircraft testing, but the development and flight test programs have not been without complications. One engine was to have been tested in Burt Rutan’s N4EZ VariEze and the other in an EAA owned Pober Pixie.

Neither of these projects went exactly as planned. Dick Rutan flew to Tempe in April to pick up an RW-100 for testing in the VariEze. But after reviewing the engine and its operating history, he refused to accept it.

Burt Rutan would not detail for us the problems he found with the engine at that time, only that he considered it to have been in a preliminary stage of development and was not suitable for installation in the VariEze. However, in an RAF newsletter published that month, Ru­tan did outline some of his objections.

While many of Rutan’s original complaints with the RW-100 have been answered in further development of the engine, no cooperative flight test effort between the two companies has resulted. Schramm subsequently launch­ed his own VariEze test program, but as of this writing, Rutan’s position is that the RW-100 installation for the VariEze has not yet been proven.

The EAA’s program to install the prototype RW-100 in the Pixie also had its share of setbacks. There was also a scheduling constraint with the Pixie that caused the engine to be removed before flight testing could begin.

Initial comments by the EAA reflected some of Rutan’s complaints mentioned ear­lier. To these, Paul Poberezny added that he didn’t like the RW-100’s twin carburetor arrangement. He preferred a single carb, either updraft or down-draft type.

A more serious objection, though, showed up after the Pixie installation was completed and ground tests were begun. The RW-100 exhibited a rough idle that caused severe tail section vi­brations in the lightweight Pixie. 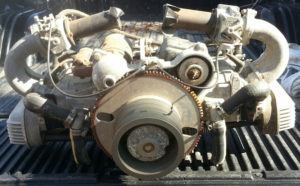 The engine was removed and returned to RotorWay. It was felt that a smaller camshaft would solve the low rpm vibration problem and still provide sufficient horsepower for the Pixie, about 75-80 hp. RotorWay expected to return the engine to the EAA in late August for continued testing.

He leased an airplane from a builder in Colorado, installed the engine and began collecting performance data. By mid-summer, he was sufficiently pleased with the project to risk having the airplane flown to the EAA convention at Oshkosh so that anyone who was interested could see the successful pairing of his engine with the VariEze.

“Everybody said it was going to be too heavy,” Schramm told us after the EAA fly-in, “but it’s just great.” He said they tuned the engine to a lower horsepower (about 94-96 hp) to give them every advantage for making their first long trip, “and we were still keeping up with all the VariEzes at Oshkosh.”

He added that the RW-100 is getting a good 15% better fuel efficiency than the 0-200. RotorWay’s VariEze pilot, Norman Bernier, had flown about 60 hours with the RW-100 when we interviewed him shortly after his Oshkosh trip.

The RW-100 has been improved significantly since we saw it last spring. RotorWay has made several additions to the basic engine and in fact, there are now two engines (80 hp and 100 hp), and a 120 hp turbocharged version should be available in about a year.

The 80 hp engine will have 133 cu. in. displacement and a smaller camshaft, which will allow hand propping and should run smoother. It will be sold without the electric starter, flywheel and ring gear for $3600 and will weigh about 13 pounds less than the 100 hp engine.

An electric starting system will be standard for the 100 hp engine, which will sell for $3800. (The typically advertised price for a zero-time overhauled 0-200 with accessories is about $4,000.)

The turbocharged engine with automatic waste gate control is expected to cost about $4500, excluding the effect of inflation. RotorWay plans to begin shipping the 80 hp engine in October or November and the 100 hp version by the end of the year.

Even as production is about to begin, other complaints have been lodged against the RW-100, particularly the performance of its twin carburetors and the reliability of its cooling system. Schramm dismissed these as unfounded. He said synchronization of the twin carbs is simple and once set, they will never need adjusting again.

Concerning objections that the carbs do not have accelerator pumps, Schramm said the engine “throttles just fine without them.” A mixture control is now available as an option, and RotorWay recommends it to pilots who plan to fly above 8000 feet.

The cooling system question involves the possibility of steam pockets forming and growing in the water channels. While this has not been a problem in the vertically-mounted helicopter engine, Dick Rutan and others have suggested that steam pockets could form with the engine mounted in the horizontal position.

Schramm said the whole idea was “a bunch of hogwash! We have no steam pockets. In fact, the cooling problem we have is that we have too much cooling and need to use a smaller radiator.” RotorWay is continuing flight tests with the VariEze and is running an extensive ground test program that Schramm claims will be equal to or better than that required for certification.

He expects to be working with homebuilt designers in the future and is also talking with the major manufacturers. “We’ve put 14 guys working on this thing for a year, plus six figures in inventory,” he said. “Now, are we serious or not?” There is no doubt that Schramm is serious.

Burt Rutan and Paul Poberezny expressed to us their hope that he will be successful. Undoubtedly, B. J. Schramm also has the best wishes of the many homebuilders who are finding it increasingly difficult and costly to find that all-important hunk of iron to make their individual dream a reality. 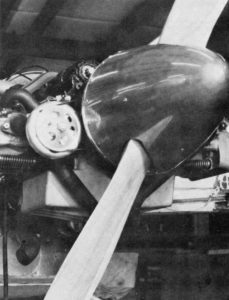 The RW-100 is shown here mounted in RotorWay’s VariEze. RotorWay says their airplane cruises at 140-150 kts indicated at 3100 rpm.

SMOOTHING OUT THE SYSTEM

To aid builders of RotorWay helicopters in adjusting their rotor system, the factory has introduced a Reflex Trailing Edge Fixture. “A carefully balanced rotor system is of the utmost importance,” said John Netherwood, President of RotorWay International.

“It will not only increase the helicopter’s performance but, at the same time, will reduce wear on components.” For those not familiar with helicopters, a balanced rotor system is one in which both blades pass through exactly the same air.

For this to happen on RotorWay’s asymmetrical rotor blades, the reflex angles of the blades may need a fine adjustment from the factory settings. “Although balanced and tuned here at the factory, the new fixture helps in achieving a finely-tuned, high-performance rotor system.”

This new fixture travels along the blade, with a dial indicator resting on the trailing edge of the blade. It allows the adjustment of the reflex angle to be within one thousandth of an inch.

RotorWay International now has over 250 Exec 90 kits out in the field, 50 percent of these overseas. Recently type-rated in the primary class in Poland, this popular homebuilt is very close to receiving certification in Australia, a high potential market for an amateur-built helicopter. 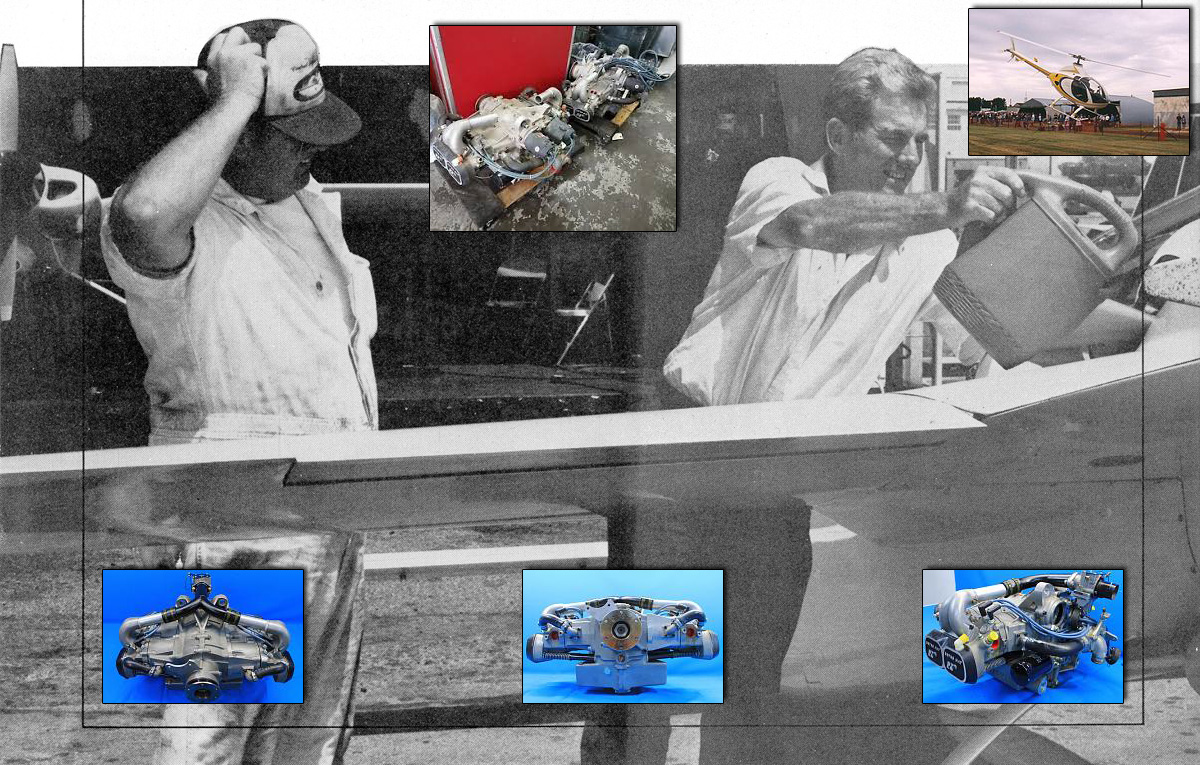 Article Name
Water Cooled Aircraft Engines - From Air To Water
Description
The move to a water cooled aircraft engine has many advantages, and also a few draw-backs. With Rotorway being one of the early companies to introduce water cooled engines to experimental aircraft and homebuilt helicopters with their RW100.
Author
Bob Newton
SHARE TWEET PIN SHARE