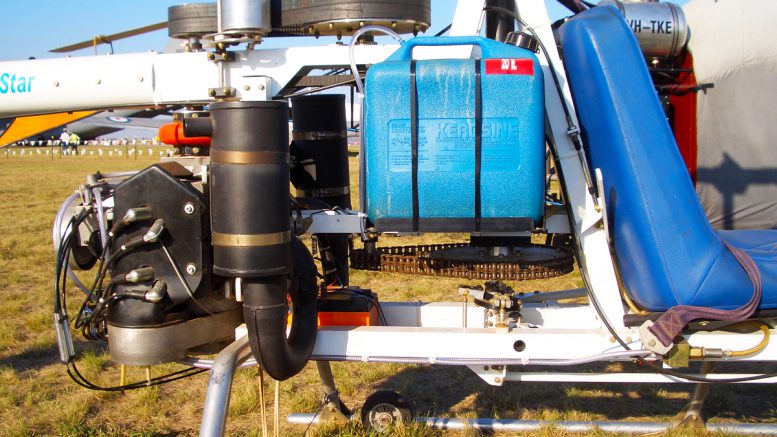 The Lonestar experimental kit helicopter was originally designed and developed in the early 1990’s before going through a number of layout changes. After the original prototype, there were three production versions – each improving on the one before.

It was a real sleeper and though it won many awards at major airshow displays around the country, the LoneStar Kit Helicopter gained little publicity.

This desirable little helicopter has all the features that todays homebuilt helicopter experimenter wants.

The evolution of the Rotax aircraft engine range made it possible to build a small lightweight aircraft and the LoneStar helicopter is one of them. Though the LoneStar kit helicopter started out with the Rotax 582 – it wasn’t long before it moved to a higher horse power two stroke engine – the Hirth F-30 engine. 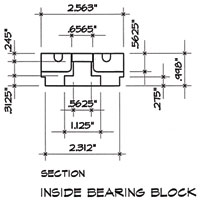 Redback Aviation purchased the Australian marketing rights and promotional material prior to the companies demise.

We have the only known remaining machinist and perspective drawings as received direct from designer and company owner, Ken Rehler before his unfortunate passing some years ago.

These ARE NOT the complete drawings – but enough information to build the swash plate (this part is complete) and some other components.

The benefits of this kind of through shaft swash plate control system for the rotorblade’s directional control can be seen in the inherent stability of similar designs such as the commercial Enstrom helicopters, the Angel CH7 Kit Helicopter and the previously mentioned Mosquito ultralight helicopters. The components also remain protected inside the shaft avoiding any damage or contamination from the elements.

The idea is by no means a new one, though its individual technical advancements certainly is.

The Lonestar factory was completely lost during floods in the mid 1990’s and thus a magnificent little design that was well ahead of its time never had a chance to fully evolve. It can only be imagined where the LoneStar might be today should it have had its chance in aviation life?

Check out the YouTube flight video which runs for approximately 10 minutes showing the Lonestar in full flight and performing various standard manoeuvres. Note the short tail boom does not seem to have any negative effects on flight performance. Please note that the model shown flying was the first production model of the three main layout configurations that the Lonestar evolved through. The picture at the top of the page was its final form including all mods and updates. The manuals and drawings for both of these designs are included in the complete pack. 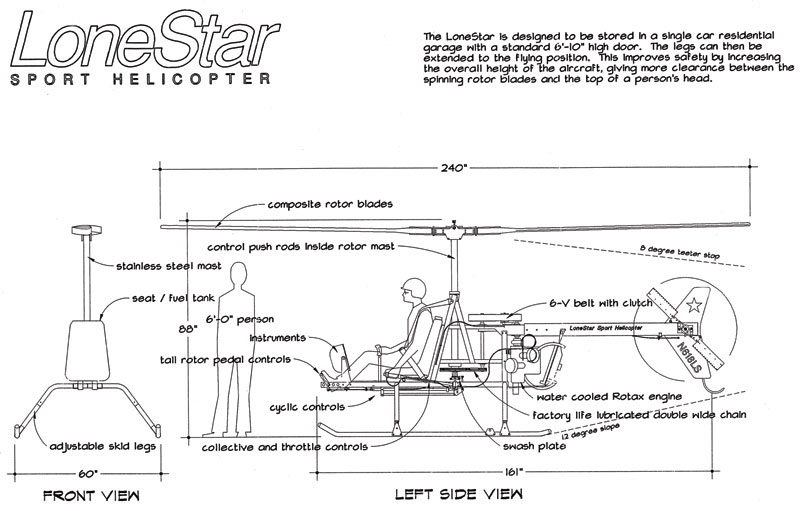 By now, everyone should know of the Aeros helicopter plans, Furia – CH6 – SkyLark helicopter plans, the Mini 1 weight-shift helicopter, and the range of Adams Wilson plans – The “Flying Triumph” AKA Choppy, the AW95 and the SkyTwister helicopters. These have been the only homemade helicopter plans available on the market – till now!

The Aeros plans were never viable in that they were generally “incomplete” and required a foundry to cast aluminum casings etc… Should this design have been further developed as was the Adams Wilson helicopter, there might be more flying today!

The Mini – 1 “weight shift” helicopter (even with the addition of a swashplate, it looks a little too simple) – I would not consider this a serious contender in this discussion, weight shift! enough said…

The Furia, well, a marvel of engineering genius – that’s if you are an engineer with access to high tech machining equipment. Otherwise, no more than an interesting read.

The Adams Wilson helicopter spin offs, AW95, SkyTwister etc… About the only viable homebuilt helicopter plans available, and quite near “complete” – or close enough to “work out” the missing information. There are also many forums discussing this design, people offering advanced drawing or pre-made parts, and MANY flying around the world.

This now only leaves the LoneStar! Like the Adams Wilson design, it is of bolt-together construction and of similar simple design. No complex gearboxes are used, simple belt and pulley drive systems, readily available raw materials, and of interesting layout. It has a through shaft control system, known for it’s improved stability.

Very similar in design the Mosquito Air helicopter (which came after the LoneStar helicopter), and with various engine options. The tail boom that remains within the main rotor disk, and works due to clearance between the rotors and the more stable swash system. A chopper ahead of it’s time, to a degree “under developed” – but still viable in it’s original format, or available for your own interpretation of upgrade.

Parts are relatively standard to manufacture – as with the AW95 helicopter. Most of the helicopter has been presented in plans and drawings. Missing are the two main members made of aluminum channel, that support the upper and lower ends of the vertical drive shafts. Most of the other parts and dimensions are given. 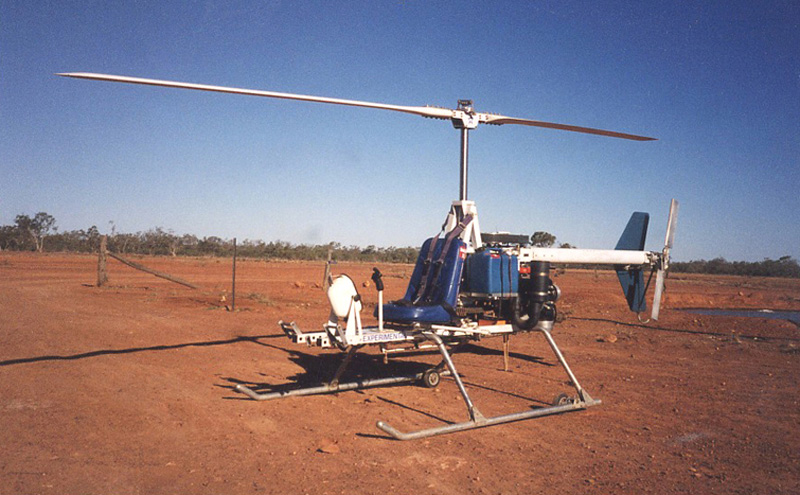 The LoneStar helicopter kit was perfect for heli-mustering, it exhibited many suitable qualities. The tail boom resided within the main rotor disk reducing the risk of tail rotor strike instances in low flying bush mustering conditions. Being responsive and manoeuvrable in tight places is a necessity when mustering livestock in the bush.

Having a short tail boom did make the little chopper some what “twitchy” in hover though not much different to an Robinson R22. The downwash did not interfere with the anti torque tail rotor as you would think it could. And once into any lateral flight (eg. forward flight), it was a stable as any other small chopper. The through shaft controls also added to the helicopters surprising stability considering its size and tail boom length.

It’s Hirth F-30 four cylinder two stroke engine offered plenty of reserve power and reliable cooling through the forced air fan system. The composite blades were fitted with erosion protection tape on the leading edge which also protected them from the many bugs found in the warm Australian conditions.

Mechanically the helicopter was tough and easy to maintain. The red dust seemed to build up quick but did little to impair operation. While I encouraged the replacing of the final rotor drive chain system with one of the many poly-chain belt options, in outback conditions, any grit that found its was to the belt cog drive could cause the belt to fail. In this situation, the chain did its job perfectly and was a relatively cheap 100 hour (or “ON CONDITION” item). Just like a motorcycle chain, it handled contamination with ease and not affect to operation of the drive system.

The pilot wore a helmet fitted with communications which offered both added safety and noise reduction when communicating via radio. Being cabinless, there was little in the way of sun protection but could be argued that there was plenty of natural air flow for cooling the pilot.

The little LoneStar kit helicopter served well till a change in livestock management and farming procedures terminated its service. It proved robust in the limited time of service and fortunately, never experienced any emergency situation or component failure.

▣ Design performance calculations were based on a standard 70 degree F / 21 degree C day at sea level with an average 170 lb pilot weight plus approximately 30 lbs of fuel.

▣ Only the Rotax 582 and Hirth F-30 engines were tested by the manufacturer in the LoneStar kit helicopter.

▣ Construction time quoted was for the aircraft kit only, not including painting, instruments, engine and rotor blade track and balancing procedures.

▣ The above specifications relate to the then current Lonestar kit helicopter.

▣ Due to later product improvement including some mast support changes, these specifications and dimensions may change from model to model.